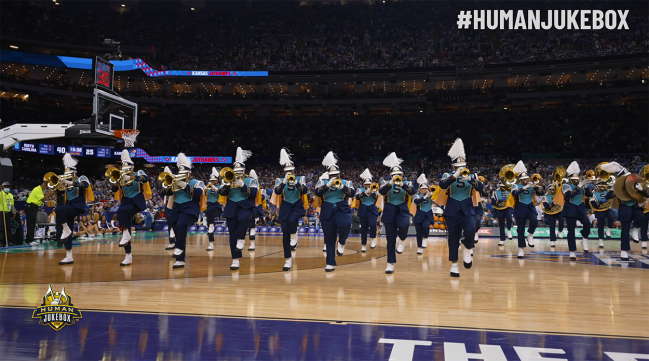 If you are unfamiliar with the Southern University Human Jukebox, let this be your introduction to the greatness. The loud and proud, brass-blaring, drum-banging, bleacher-dancing band from Louisiana is among the elites when it comes to college marching bands.

As opposed to the traditional marching style that you might find at a Big Ten program, the Jaguars create their own style. It’s high-energy and it’s in-your-face with showmanship and performance.

The Human Jukebox, being from just up the road, performed at two important college basketball games over the weekend. While the performances were one thing, the 4k video from their performances really took things to the next level. It is so crisp — shoutout to Garrett Edgerson, Perry White, Chris Barber, Zachary Daigle, Daryn Thomas, Kimani Alexander, Jay Allen, Ronnie Robinson and Loren Sullivan.

Southern’s band played at the HBCU All-Star game on Sunday and totally crushed it, as they always do.

However, during the Human Jukebox’s performance on Monday night, they really encompassed the full feeling and culture of New Orleans. They broke out a very soul, jazz and funk-based tracklist and absolutely wailed.

Here is the oder in which things went down:

Again, while the performance was straight flames and the perfect representation of New Orleans, the 4K video made it that much better. Peep the dance moves at the 4:33-mark in particular.

As is per usual, Southern University’s Human Jukebox Marching Band was absolutely fantastic. Here are some of their performances in the past:

If you ever have the chance to watch them in-person, take it. You will not be disappointed.