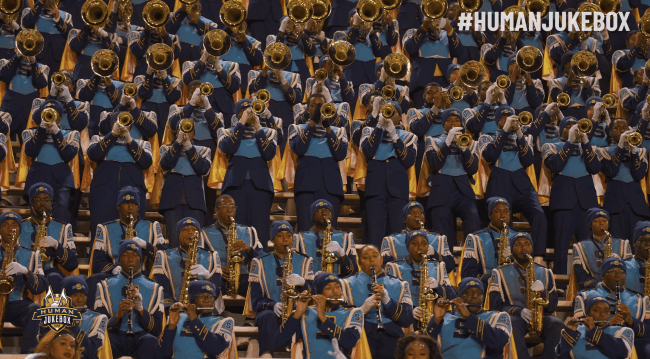 Anderson .Paak and Bruno Mars really decided to team up and never miss. Now, the Southern University Human Jukebox marching band has decided to join them.

Better known as Silk Sonic, the musical duo recently released their debut album An Evening With Silk Sonic late last week. If you have not heard it all of the way through yet, start there.

Once you have heard the album from start to finish, you need to hear this marching band cover. When it comes to college marching bands, Southern University has one of the best in the nation.

Unlike the bands like those of the Big Ten or LSU, the Human Jukebox gets funky with it. Their formations are just as tight as their “traditional-style” counterparts, but they add an extra element of rhythm that puts them over the edge.

While football is undeniably king in the South, for many HBCUs, the marching band is just as — if not more — important than the game itself. Forget the final score, which school had the better band. In almost every instance, it’s the Human Jukebox.

One day after Silk Sonic released its album, Southern decided to bring it to the stands with a cover of ‘Smokin Out The Window.’

Here is the original:

And here is the Human Jukebox cover. It’s smooth, sonically-florid and seductive. Shoutout to the Dancing Dolls as well, who also went crazy during this performance.

Southern blew this cover out of the water and continues to drop bangers. The Human Jukebox also covered Silk Sonic’s Leave The Door Open this year.

If you ever have the opportunity to get to an HBCU football game, or a Battle of the Bands, take it. You won’t be disappointed.

The Human Jukebox also covered Travis Scott’s NC-17 and Lil Nas X’s Industry Baby this year and they were both awesome. As is their entire catalog, which you can find HERE.