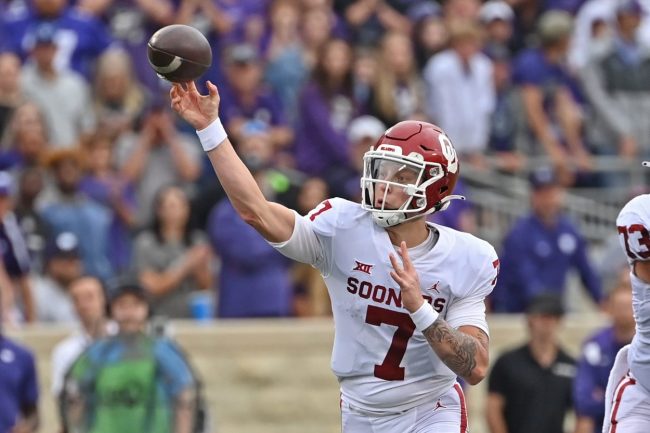 After a wild end to 2021, Spencer Rattler has officially turned all of his focus to South Carolina in 2022. The former five-star recruit signed a deal for his Name, Image and Likeness on Tuesday less than 24 hours after announcing his official arrival date to Columbia.

Rattler, who began the 2021 season as the starting quarterback at Oklahoma, was a Heisman Trophy candidate prior to the season. Six games later, after falling behind 28-7 in the Red River Shootout against Texas, head coach Lincoln Riley turned to the bench and sent Caleb Williams out in his place.

Williams maintained the starting role for the rest of the season and Rattler hit the transfer portal immediately after the regular season. Not long thereafter, the Arizona-native committed to the Gamecocks in part due to a unique pitch from offensive coordinator Marcus Satterfield.

Since then, Rattler has been working out with his private quarterback and was dropping dimes. He was even throwing 75 yards on a whim in a long toss competition.

In between his training sessions, Rattler traveled to South Carolina and got the full QB1 treatment. He had dinner with Alshon Jeffery at an expensive steakhouse and there is a slim chance that he picked up the tab.

Now, just over a week later, he has a timeline in place to get to campus full-time. Rattler announced on Monday that he will be in Columbia next week and looks forward to getting to work.

Can’t wait to get up to Columbia next week and get to work with the guys! #SpursUp 🤙🏽

He will also be securing the bag.

Less than 24 hours after announcing his arrival to South Carolina, he signed a deal for his Name, Image and Likeness. The Garnet Trust, “a platform for fans and businesses to connect with and support University of South Carolina student-athletes through name, image, and likeness deals,” announced their partnership with Rattler on Tuesday afternoon.

The terms of the deal are unclear, but he’s getting paid through the crowdfunded trust. In turn, he will offer exclusive content and appearances. According to the trust, their deals are in exchange for “media activities, attending fan events, autographing items and much more.”

Rattler has not even arrived on campus and he’s already cashing in. This is one of multiple deals that Rattler has signed, and he even has his own merchandising store.