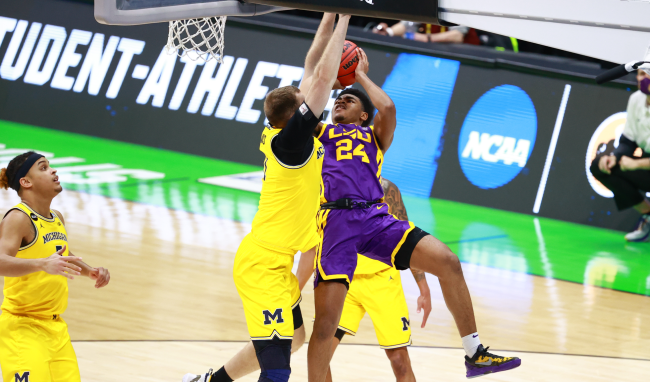 Sometimes you just have to get creative. This is something that Andrew Clay, the sports director for KATC in Lousiana, knows all too well when he set out to put together a highlight package of LSU’s NCAA Tournament loss to top-seeded Michigan on Monday.

Because the NCAA doesn’t allow news stations to air any highlights of tournament games until the post-game show ends on CBS, Clay had to find a way around it.

Calling the rules complex and antiquated, Clay added, “What they don’t say is I can’t open up MS Paint and go to town.”

And go to town he did, delivering some A++ “highlights” from LSU’s NCAA Tournament loss using several MS Paint “clips” from the game.

Related: The Best TikTok Accounts To Follow During The NCAA Basketball Tournament

He’s got LSU’s Cam Thomas going all NBA Jam – “ON FIRE” – from three-point range. He’s got the coaches Ed Wade and Juwan Howard looking splendid on the sidelines wearing their masks. He’s got Michigan fans celebrating in the stands – at a comfortable social distance, of course.

Honestly, it’s as good a highlight package as I have ever seen.

Dear NCAA, you made me do it. #NCAATournament #MSPaint pic.twitter.com/MSsUvhc9cT

All that was really missing was a “Boom goes the dynamite.”

I have spent at least an hour trying not to fan-boy a response. This is the ultimate compliment, especially coming from the owner of the sports-art intersection.

Also, how long until that highlight package is going for several million dollars on the NFT market? I give it a week, tops.

The NFT crowd is encouraging me to find a niche pic.twitter.com/t303kgeHnm

Pay this man whatever salary he wants. Also, why is the @NCAA so ass-backwards?

My wheels are turning

We need these all tourney.

Related: Where Does Cameron Krutwig’s Mustache Rank Among The Dirtiest Facial Hair In March Madness History?