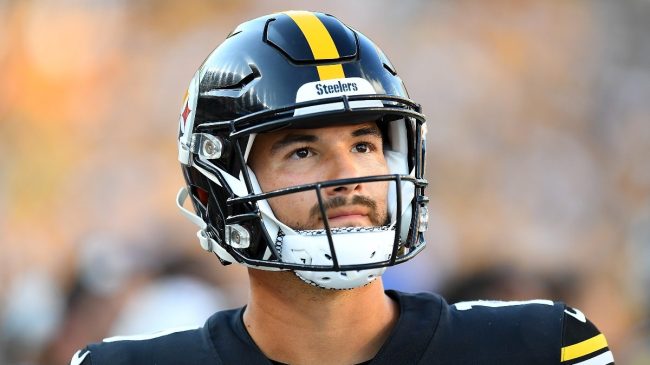 Mike Tomlin has officially announced Mitchell Trubisky as the starting quarterback for the Pittsburgh Steelers. Newly acquired rookie Kenny Pickett is the immediate backup while Mason Rudolph is third on the depth chart. With the new season right around the corner, Tomlin shares why he chose Trubisky as the starter.

After a roller coaster of a season last year with Ben Roethlisberger leading the way, Pittsburgh enters a new era. The front office signed Mithcell Trubisky as a free agent during the offseason then drafted Kenny Pickett in the first round of the NFL Draft. However, Trubisky proved to be the man for the job, and the Steelers head coach explains why.

Pittsburgh should feel excited about Trubisky being under center. Sure, his first stint as a starter didn’t go well, but the Chicago Bears have been a mess for years. Additionally, he spent a year learning behind Josh Allen before signing with the Steelers. Based on how poorly Roethlisberger played last year, this franchise could have a noticeable upgrade under center for the 2022 season.

At the same time, this is situation is likely the best-case scenario for Kenny Pickett. He’s clearly the quarterback of the future and would largely benefit from sitting out a full year. The Steelers are in good hands with Trubisky leading the way and at the very least, Mike Tomlin is excited about it.

As for Mason Rudolph, it sounds like the immediate backup job was never his, per Brooke Pryor.

Mike Tomlin says it was "clerical" error that caused the depth chart discrepancy on the QBs. The one listed yesterday was the one from the first preseason game of the season.

We’ll see how Mitchell Trubisky holds his own in the season opener against the Cincinnati Bengals. If the Steelers quarterback can put together a solid outing, then the fanbase should jump on board the hype train in Pittsburgh.