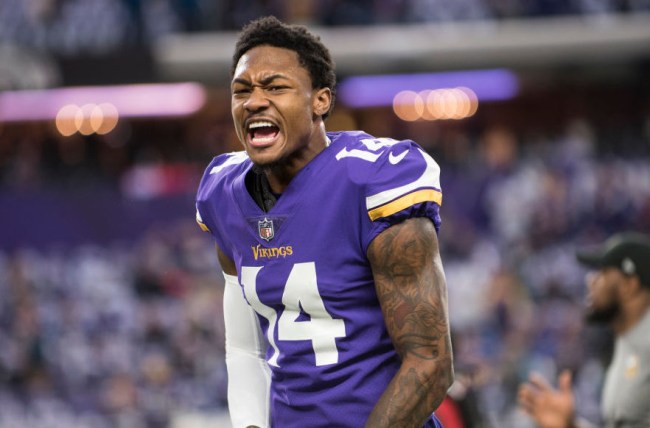 The Minnesota Vikings have gotten off to a pretty underwhelming start this season thanks in no small part to a lethargic offense that has racked up an impressively unimpressive 169 passing yards per game and it’s safe to say not everyone is thrilled about how things have gone this season—especially Stefon Diggs.

The wide receiver was suspiciously absent from practice on Wednesday and the rest of the locker room wasn’t exactly thrilled with his decision to go AWOL, as there were reports a number of his teammates were questioning his commitment to the team.

On Thursday, Diggs appeared to confirm the speculation concerning his discontent when he spoke at a press conference and added fuel to the fire by implying the rumors were true.

Stefon Diggs on rumors that he wants to be traded:

“I feel like there is truth to all rumors. You know, no matter how you dress it up. I won’t be speaking on that at all.” pic.twitter.com/xUO5homKyw

Earlier this week, fans in Buffalo got very excited after Diggs followed a number of Bills players on Instagram because there’s nothing people love more these days than reading way too much into social media.

Now, it appears Patriots fans who are into overanalyzing online activity may have a reason to be pumped, as Julian Edelman, Tom Brady, and James White all recently gained a new follower in the form of Diggs.

Sure, there’s a chance Diggs is just a fan of Brady’s unparalleled social media game but that doesn’t explain why the other two players got the look.

Based on how they’ve started the season, the Patriots don’t necessarily need a ton of help on offense but I’m sure they’d be more than happy to have Diggs fill the spot that was vacated by Antonio Brown.