The Internet Had Some A+ Reactions To Stephen A. Smith Shooting A Dude On ‘General Hospital’ 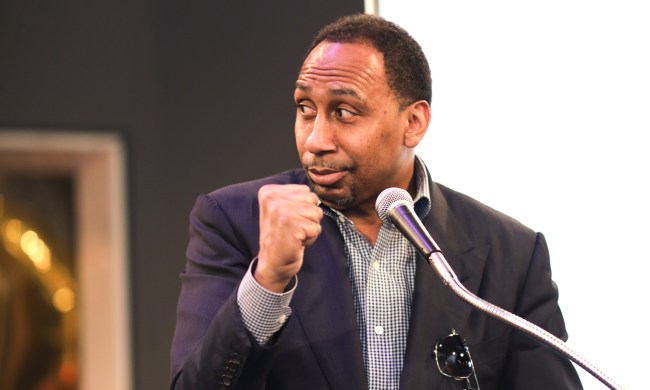 ESPN talking head Stephen A. Smith is a man of many talents: uninformed football takes, debating himself, beefing with his own burner account, acting in soap operas.

Yes, you read that right. Stephen A. Smith is something of a soap opera star.

Look. Here he is at Young And The Restless Celebrates Eric Braeden’s 40th Anniversary celebration.

Dude is ingrained in the soap opera biz.

Heck, he’s actually appeared on 20 (TWENTY!) episodes of General Hospital playing a reporter/surveillance expert for the mob named Brick dating back to 2016.

Near as I can tell, Brick doesn’t have a last name, but the story of how Smith ended up on General Hospital is fascinating.

“I have four older sisters, and when we came home from school, all the TV’s in the house were on GH,” Smith told ESPN Front Row back in 2016. “Since I wasn’t allowed outside until I finished my homework, I watched the soap every day.”

As for his debut on the show, he was already very familiar with Maurice Benard, mobster Sonny Corinthos on the show, after he made an appearance on First Take in 2015.

“With GH, you memorize lines in a script, bringing other people’s words to life,” said Smith. “The pressure is immense. I practiced and practiced to make my lines conversational. Since I have watched the show for so long, I know Sonny and his mannerisms. So the scene was like talking to a long-lost friend and I was working with Maurice, one of biggest soap stars ever, who talked about how he visualizes the scene and environment. ‘How would you bug a phone? How would you say this to your boss, the mobster?’ I knew him and how he goes about things. I imagined all that and it helped relax me.”

Now Smith appears to have gotten it down pat as this week Brick was not just involved in the storyline, he got into a slow-motion shootout where he shot a guy!

Did y'all know BRICK saved the day yesterday on @GeneralHospital????? 😀Haaaaaaa!!!! pic.twitter.com/jvzYSNchxW

Naturally, Smith’s sports fans could not help themselves but turn the scene into a boatload of jokes and memes.

LAY OFF THE WEED BUSTA pic.twitter.com/gn2tcIXmvS

I mean is this General Hospital or Bourne Identity? Lol

When your team trades for Kwame Brown pic.twitter.com/MFDffd7vL3

He really is. Wish he were on more.