If Anyone Needs Me I’ll Just Be Here Watching This Video Of Stephen A. Smith Debating Himself On Repeat 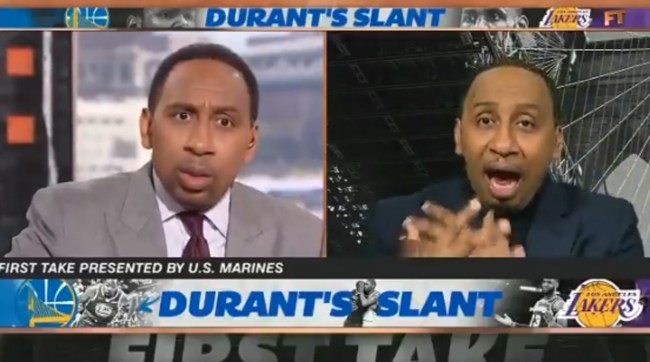 Someone over at YouTube channel Morning Sports Wood with a lot of free time on their hands and an inordinate amount of creativity created a hilarious video of ESPN First Take host Stephen A. Smith debating himself, which when you think about it, would really be just about the perfect sports talk show.

I mean, you just know that even if Stephen A. had to appear on First Take with himself as the co-host instead of Max Kellerman there’s no way he wouldn’t find some way to be a contrarian – with himself.

If you think First Take moderator (is that her title?) Molly Qerim struggles with holding the show together now, just imagine if she had to deal with this on a daily basis?

But really, Stephen A. Smith debating himself is definitely the GOAT of sports discussion show fantasy lineups.

“Did Michael Jordan not hug you enough?! Did he not appreciate you enough?! Is there something that’s missing in terms of the love, the brotherhood, or something that tells us that, you know what?! You’re just up in your feelings!”