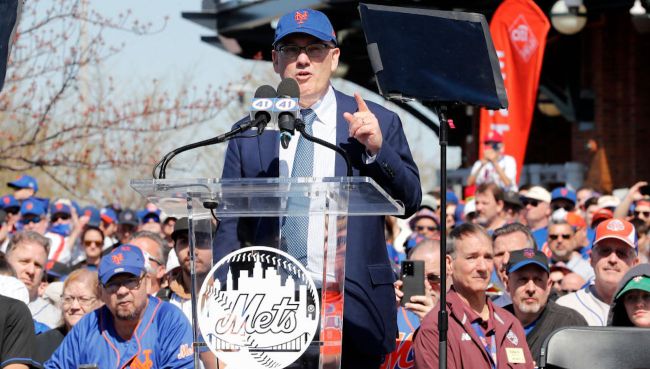 New York Mets owner Steve Cohen has proved, once again, that his beloved baseball team ain’t your father’s Mets, as the billionaire venture capitalist decided to eat $40 million in salary in order to get 39-year-old deadweight second baseman Robinson Cano off the roster.

Cano, who missed the entire 2021 season due to a steroid suspension, has failed to make an impact so far this season with a batting average of .200 and just one home run. With the deadline to reduce rosters to 26 players coming and going on Monday, the Mets decided to cut Cano despite the fact that they still owe him about $44 million.

In response to the move, Cano’s agent Brodie Van Wagenen — who was the Mets’ general manager at the time they traded for him (Hmmmmm, that seems odd, doesn’t it?) — told the New York Post that his client “absolutely still wants to play.”

“Robbie absolutely still wants to play. Given the right situation, he can still make a meaningful contribution for a team,” Van Wagenen said. “Robbie is a true professional with a great deal of respect for the organization. He understands they had a tough decision to make. He wishes them well going forward.”

The decision to cut Cano has been a wildly popular one in the baseball world as it’s proven that Cohen is placing winning about financials:

they really did it

(not surprised, though — why would Steve Cohen suddenly be concerned about a $$$ decision now when things are going well and the team has better options? easy baseball move) https://t.co/1XpDd45IIg

Steve Cohen gets it, love that guy. That’s an owner who wants nothing but to pile up as many Ws as possible. Hope the Mets win it all https://t.co/6UclDtYsGy

All the owners can afford to eat $40 million in sunk cost, but Steve Cohen can, like, really afford it.

BREAKING: God exists and his name is Steve Cohen https://t.co/X3ccQWGCZx

Imagine thinking Steve Cohen cares about Cano’s $40 million when he paid $141 million for this: pic.twitter.com/dIjD2vlTaC

Steve Cohen just ate one of the worst contracts in the league so the Mets could win. So long Robbie. pic.twitter.com/TbZ4lGXUHA

This is a Steve Cohen move- most owners don’t have the balls to cut DFA a player making 20+ mill https://t.co/eNUtF5hhhc

This is a prime example of “we do not care how much you are paid, if you are not one of the best 26 players on this team, you’re not going to be on the team”. The Steve Cohen Mets do not care about money. https://t.co/E29EboWI4c

Hal Steinbrenner has Ellsbury make up injuries for 3 years so he can collect insurance money, but it still counts against the fake cap

Mets fans should be thankful they have the New George. Honestly jealous

The Mets make a baseball move without worrying about the money they owe the player.

Huge difference between Steve Cohen and the Wilpons.

The first-place New York Mets will look to continue their hot start to the 2022 season when they host the defending champion Atlanta Braves in Queens over the next few days.