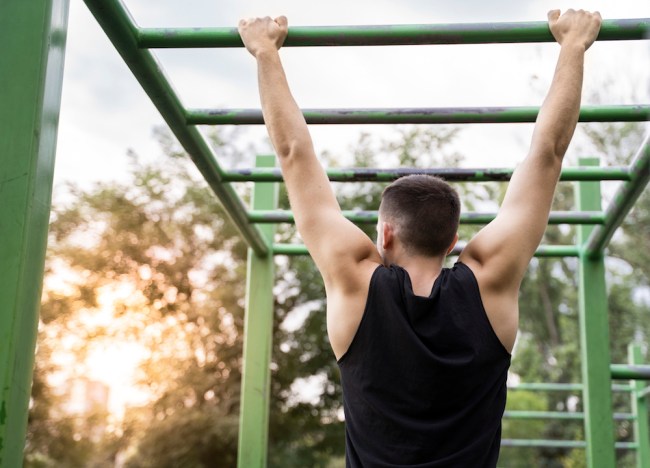 The world record for Most Murphs Completed in 24 Hours has been broken again in the span of a month. Michael P. Murphy is a former Navy SEAL and the previous record holder. He set his world record of 16 Murphs in 24-hours back on Memorial Day and that record has already fallen to a 17-year-old bro in Wisconsin.

For anyone who needs a refresher on the Murph Workout, it is a common CrossFit (and military) workout created to honor former Navy SEAL officer Michael P. Murphy who received the Medal of Honor ‘for his actions during the War in Afghanistan’ and he was the first member of the Navy to receive the Medal of Honor since the Vietnam War. The workout consists of ‘a 1-mile run, 100 pull-ups, 200 push-ups, 300 air squats, and a final 1-mile run.’

Prior to Michael P. Murphy’s world record 16 Murph workouts in 24 hours the previous record was 15. So it seems like until now the world record had been broken by whole numbers. Alas, we’re looking at fractions now as the teen in Wisconsin swooped in with a new world record after completing an absurd 16.75 Murphs in 24 hours.

📸 History. Made. • This candid photo encapsulates the moment after Tyler Friese (@tyler_friese ) set the World Record… • As Tyler crossed the finish line – after working for 24-hours straight – he immediately hit the ground. • ‼️With him lying on the floor, I walked up, knelt beside him, and asked “Are you alright? What do you need?” • ‼️This picture of us laughing and smiling together captured his response to my question, as he told me “Nothing. I’m ready to go for another 24 hours.” • 💪🏼🤯🔥 • Shoutout to Kristopher Rodriguez (@k_rods_journey ) for capturing this light-hearted moment, at the end of an unforgettable day, that neither Tyler or our FUEL Fitness community will ever forget. • #FUELfitness #SportsCenter #ESPN #Murph #WorldRecord #LiveWithFire #thisissportscenter #MurphChallenge #Trending #Fitness #Motivation #Inspiration #CrossFit #LevelUp #MakeHistory

Tyler Friese completed 1,700 pull-ups, 3,400 push-ups, 5,100 squats, and ran 33 miles in the span of 24 hours and in doing so became the new world record holder. Those numbers are pretty much meaningless to me. The idea of doing just 1,700 pull-ups in 24-hours is something I can’t even wrap my mind around. Nor can I envision doing 3,400 push-ups in 24 hours. Really, the only leg of this world record that I can grasp is running 33 miles but he did that on top of everything else AND while wearing a 20-pound vest.

Some pictures from the weekend. S/O @kandmphoto_wi for taking these dope shots. Khris is very talented and always does an amazing job. Make sure you check out his content, give it a like/share.

24 Hours 33 Miles of Running 1700 Pull-Ups 3400 Push-Ups 5100 Air Squats (All while wearing a 20lbs vest) And a New World Record. All 16.75 Murphs were completed under 1 Hour, with an average pace of 51 Min. Prior to this Murph Challenge I did little to nothing to train for it. The most I did was a Double Murph 3 Weeks ago. Probably not the best idea for most, but I felt ready for it. Going into this Murph Challenge I had no doubt I was physically and mentally capable of this incredible feat. This was because of the @joshbridges_training. I have been following this program for 6 Months now and feel like I am in a constant state of physical readiness. I always feel like I am at my fittest and am getting better every day. #galations614

According to Milwaukee’s TMJ4, Tyler Friese completed this record at FUEL Fitness in Oak Creek and he’s already been featured by SportsCenter for his achievement. When the 24-hours was up, FUEL Fitness owner Andru Krol asked Tyler if he needed anything to which he replied “nothing. I’m ready to go for another 24 hours.”

I love the attitude but I’m 100% calling b.s. on that comment. No way his body wasn’t screaming for sleep after going hard for 24-hours straight.