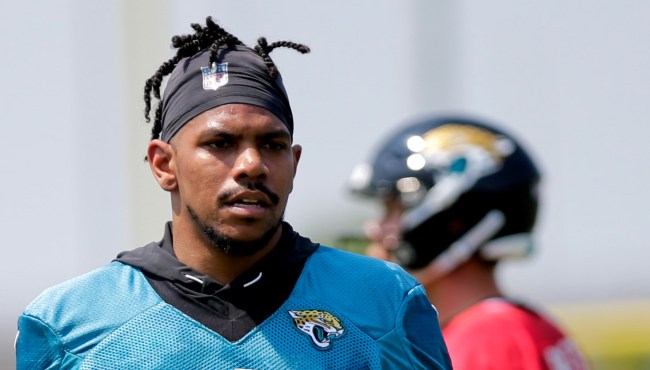 The story of former Bills wide receiver Terrelle Pryor being stabbed (allegedly) by his girlfriend Shalaya Briston has to be one of the weirdest things to happen during the 2019 NFL season.

Three weeks ago, the currently unemployed Pryor was stabbed in Pittsburgh and taken to hospital where he underwent surgery and was in critical condition.

I use the word “taken” there loosely because, according to Pryor’s lawyer, after the stabbing Briston and her friends drove Pryor to the hospital where they “shoved” him out of the car onto the sidewalk.

Since then, Briston has been charged with attempted homicide and aggravated assault, Pryor’s been charged with misdemeanor assault, and the landlord of Heinz Lofts (where the stabbing took place), is trying to kick them out for violating the “rules and regulations” of their rental agreement.

Apparently, stabbing people on the property is frowned upon.

On Wednesday, Pryor took to social media to share pictures of the 30 staples it took to close his incredibly large stab wounds.

Easy to see, based on the size of his wounds, why Pryor was in intensive care for several days and claims he almost died twice following the stabbing and lost 3.5 liters of blood.

Watch Terrelle Pryor Say He Almost Died Twice After His Girlfriend Shalaya Briston Stabbed Him in The Chest After They Fought Over Her Going to Club With Her Friends Who Wanted to Leave Him Dead in Kitchen (Pics-Video) https://t.co/axZWm8FIoR pic.twitter.com/v8QqyIYVsi