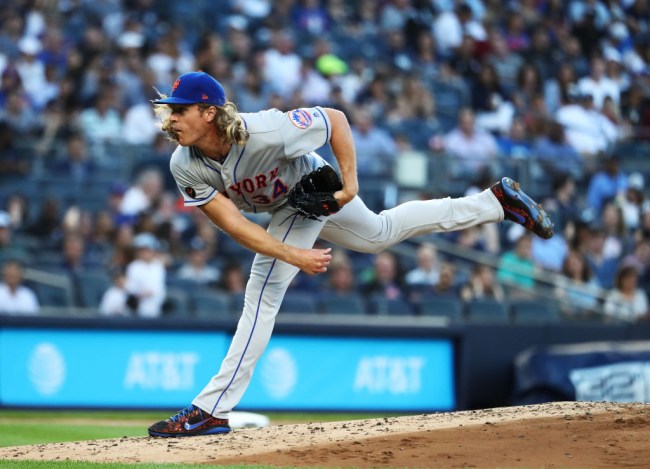 The NY Mets might be cursed. After starting the season 11-1 the Mets have gone downhill quickly and are now 40-56 but things are about to get much worse for them now that they’ve lost their pitching ace Noah Syndergaard after he contracted hand, foot and mouth disease.

Syndergaard on the DL with "hand, foot and mouth disease." Contracted it the Mets believe working a youth camp.

Mets assistant general manager John Ricco revealed Sunday that Syndergaard has been diagnosed with hand, foot and mouth disease, a viral infection common in children. The Mets believe Syndergaard may have contracted the illness while working at a youth camp over the All-Star break.

Syndergaard, the owner of one of the Majors’ hardest fastballs, caught the attention of the Mets training staff near the end of his start Friday at Yankee Stadium, when his velocity dipped into the low 90s. He was allowed to finish the fifth inning but was removed afterwards, his night capped at just 84 pitches. Syndergaard explained feeling “dead arm” in his postgame comments; he and the Mets both chalked the dip in velocity up to “fatigue.”

“It took its toll the other night. He had trouble breathing, and that’s why you saw his velo down,” Callaway said. “During the game, we couldn’t quite figure it out. But I put my hands on his legs to talk to him when he came out, and I felt his legs shaking. He was just weak and run-down.”

It was then that Syndergaard noticed the most telling symptom of hand, foot and mouth disease, which is contagious: a blistery rash that spread on the inside of his hands. The illness also causes fever, sore throat, rash and lethargy.

Of course the Internet had plenty of jokes about Syndergaard’s bizarre illness.

Where was this youth camp, Medieval Europe?

So today we learned @Mets Noah Syndergaard has contracted hand, foot and mouth disease.
Yesterday Yoenis revealed he may need heel surgery due to calcification.
What are the odds that tomorrow Jacob deGrom reveals he has scurvy…

This sums up the @Mets and what it’s like being a Mets fan. This only happens to us.

The last time this happened it was the London Archery team in 1642!

Cespedes just got off the DL and still might need surgery,
I mean what else could go wrong for the Mets?

Noah Syndergaard diagnosed with Hand, Foot, and Mouth disease! You just can’t make this shit up. I’m actually starting to believe that the Mets are jinxed.