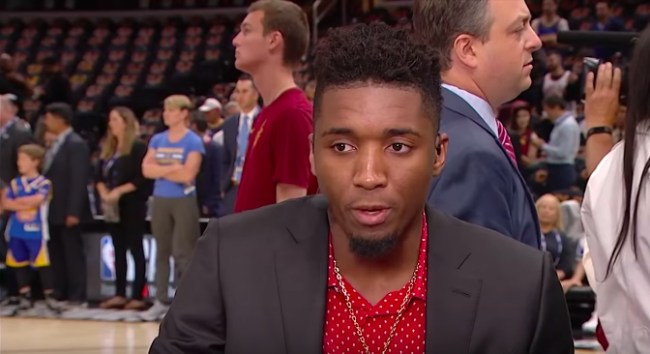 I know this may be hard to believe, but I recently scrolled through a Twitter thread that was 100% positive. No name calling, no keyboard tough guys, just all love and support. Sometimes we gotta stop to look at the Twitter rainbow while the hurricane surrounds us.

Those who have had an Apple product malfunction don’t need to be reminded of how costly it could be. I recently spilled no more than an ounce of water on my keyboard and needed to cough up $450 to get the RAM replaced or some mumbo jumbo.

A Twitter user named Andrew Simeona recently told a story on Twitter about his brother, who has development issues, running into an issue at the Apple Store and Jazz star guard Donovan Mitchell coming to the rescue.

I have a brother that’s a little delayed in his development.

At the Apple store today he was told by a rep what he'd have to pay to have his iphone repaired. He couldn't afford it. Spida overheard and covered the cost for him. Donovan is simply the best #takenote pic.twitter.com/NIKvoRBhlM

Yes, a small gesture from a player who the Jazz are going to make very, very rich, but there’s something so impactful about deeds done without E:60 cameras around. Spida couldn’t have known this story would go viral, yet he did it anyway. “The true test of a man’s character is what he does when no one is watching,” -H. Jackson Brown, Michael Scott.

My nephew was working at the Apple Store last night and told me about this story. He isn’t a basketball fan, but now he’s a Donovan fan

My screen been broke since college 👀👀!??

Can we re-count the Rookie of the Year votes please?