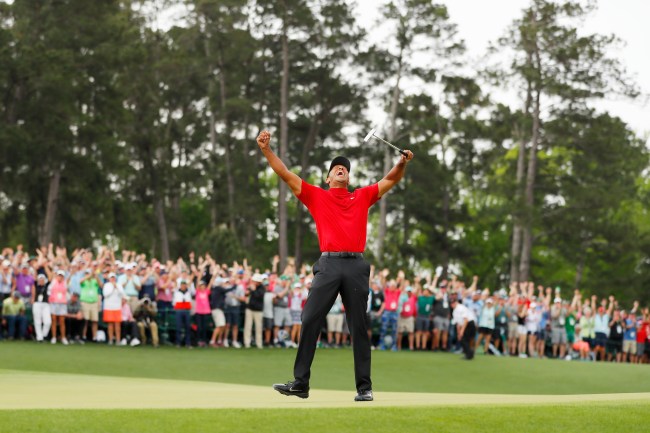 April 14, 2019 was one of the most memorable days not only in golf but in the history of sports as a 43-year-old Tiger Woods won the fifth green jacket of his career 14 years removed from his fourth.

Everything about that final round on Sunday was unbelievable. We had the drama on the Par 3 12th with players finding Rae’s Creek, we saw Francesco Molinari find the water on No. 15 all the while Woods played his final six holes in 3-under to beat Dustin Johnson by a single shot.

Woods will now look to defend his Masters‘ title this week and while it’s been over 18 months since his historic win in 2019 it’s still fresh on his mind.

During his press conference at Augusta National on Tuesday, Woods got teary-eyed talking about that memorable final round, specifically about how special it was to have his family there behind the 18th green and how picking up his son Charlie reminded him of his dad embracing him behind that same green years ago.

“I still get chills just thinking about it,” Woods said. “Coming up 18, knowing that all I had to do was to two-putt that 15-footer. Seeing my family there, my mom and my kids and all of the people that helped support me, were there for me through the tough times.

Walking up there I was just trying not to lose it. When I walked off the back of the green, to see Charlie there and just open up our arms. It meant a lot to me, and it still does. It reminded me so much of me and my dad. To come full circle like that, I get a bit teary.”

Woods will begin his title defense on Thursday morning at 7:55 AM EST off the 10th tee and will play alongside 2019 Open winner Shane Lowry and 2019 U.S. Amateur champion Andy Ogletree.

Related: The 6 Most Intriguing Storylines To Pay Attention To During The 2020 Masters