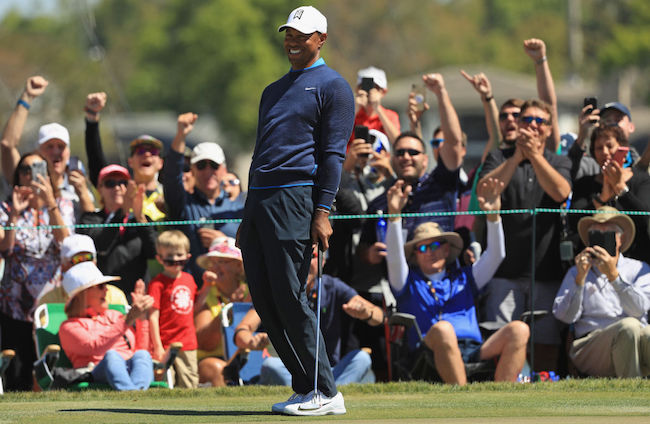 Last week, the old Tiger Woods made an appearance at the Valspar Championship when the golfer finished the tournament tied for second place— a performance that helped propel him to the top of the betting charts for this year’s Masters (as well as the top spot in the heart of John Daly). While he’s well off the lead at the Arnold Palmer Invitational at the time of this writing, it appears golf’s savior has risen from the dead.

Woods saw his career derailed a few years ago after he injured his back and watched his performance continue to decline until he decided to take a break from playing competitively. In 2015, he underwent the first of his four back surgeries so far, and his triumphant return comes after recovering from the most recent one in April of last year: a spinal fusion that was conducted by Dr. Richard Guyer of the Texas Back Institute in Dallas.

According to The Golf Channel, a particularly thankful fan tracked down Guyer’s address and decided to repay him for his services in the best way possible: an Edible Arrangement along with a message thanking the surgeon for “making Tiger Woods great again.”

Tiger’s suregon deserves the WORLD so I had to send him a little snack pic.twitter.com/UYnMqDoIvZ

If you’ve ever been lucky enough to unexpectedly receive a bouquet of chocolate-covered strawberries at your door, then I don’t have to tell you that an Edible Arrangement is one of the greatest gifts a person can receive as a token of gratitude.

I’m honestly not sure how the floral industry even exists anymore.