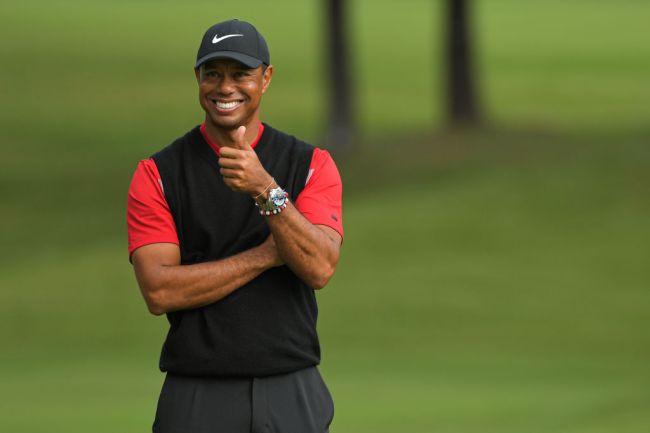 Tiger Woods’ surprise announcement that he recently underwent yet another back surgery, his fifth since 2014, caught the sports world off guard. The surgery was the fourth microdiscectomy procedure of his career, so at this point, it’s almost become a regular thing for Woods, but nevertheless, there was concern that this could be a nightmare situation all over again for the 45-year-old.

Woods’ hope was to be fully recovered and ready to play in this year’s Masters in April. While that seemed like a somewhat lofty goal following the initial shock of the surgery news, it seems like there’s a high possibility we see him tee it up at Augusta.

Notah Begay, former PGA Tour and one of Woods’ closest friends, recently spoke with Golf Channel and explained that Woods is already up and hitting balls. Rory McIlroy also shared that Woods had the procedure done on December 23 and that he was “back on his feet the next day.”

“He’s fine,” Begay told Golf Channel. “I mean, I literally 15 minutes ago exchanged texts with him, and he was hitting golf balls. It’s not like he’s laying in the bed watching reruns of Friends. He’s gotten the pain alleviated. I promise he wasn’t trying to rip his driver out there, but he’s going to let it come back, he’s going to let it heal and we all know that he’s got the event in April circled.”

It’s clear that Woods’ surgery was a great success and his recovery process is going as smooth as can be given the fact he’s already up on his feet and practicing.

Begay explained that in his mind Woods would need at least two starts before the Masters to be competitive at Augusta. Perhaps, if we want to be optimistic, we could see Woods back in action sometime in mid-March during the stretch of The Players, the Honda Classic, and the WGC Match Play.