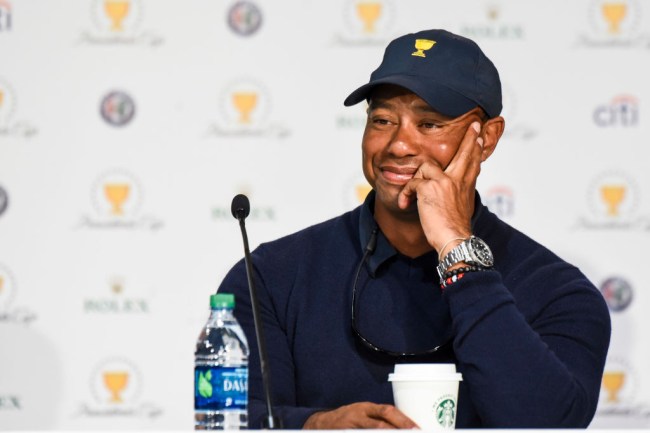 Tiger Woods is set to play in his first event of the new PGA Tour season this week at the ZOZO Championship in Japan. It will also be his first event since undergoing yet another knee surgery back in late-August.

Media members asked Woods not only about his knee, but also tried to get a little bit of information out of him about the upcoming President Cup in Australia where Woods will be the U.S. Team’s captain. As the captain, Woods could award himself a captain’s pick which would allow him to play for the U.S. as well as captain the side.

During the Tuesday press conference, Woods told the media that his latest knee surgery would have actually happened last year, but he was playing too good of golf to step away for an extended period of time.

“I was intending to actually get it done last year after the Hero World Challenge. Because I had played well in the playoffs and I’d won the Tour Championship, I figured I keep rolling with it,” Woods told reporters. “I wanted to play at Torrey at the beginning of the year, and if I had the surgery I wouldn’t be ready for Torrey Pines, and so I decided to not have the procedure done and tried to get through it the rest of the year.”

After Woods was eliminated from the FedEx Cup which put an end to his season, that’s when he decided to go for the surgery. He stated that the surgery was to get ready for this upcoming swing in Asia and “possibly Australia.”

Related: A Tiger Woods Memoir Is Coming With Information Straight From Him And His Inner Circle

That “possibly Australia” quote is a big one, meaning that he’s at least thought of picking himself.

The next quote-bomb came when he said “I’m excited about having this end of the year run where I’m feeling much more fit. I don’t have that achiness I’ve been dealing with for the past couple of years.”

Again, reading between the lines here, it doesn’t sound like Woods playing on the Presidents Cup team is out of the question.

Woods also explained that he, his vice-captains and the eight players that automatically qualified practice a style of open communication where he said “they have sort of voiced who they want on the team.”

Whether or not any of those players have voiced that they want Woods to be one of the 12 on the team is the question. He finished 13th on the U.S. side of the Cup’s standings with Tony Finau, Gary Woodland, Rickie Fowler and Patrick Reed rounding out the Top 12.

Woods has played in eight previous Presidents Cup and owns a record of 24-15-1.