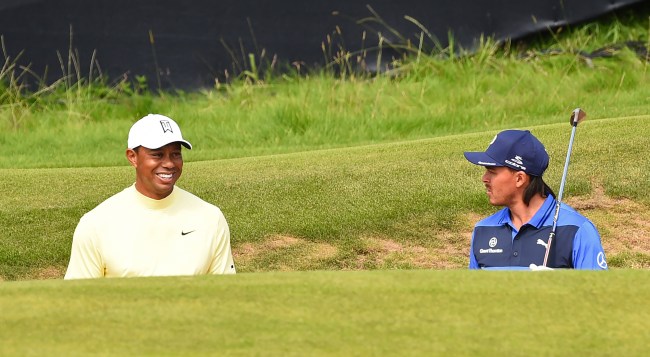 Tiger Woods knew this year’s course at Royal Portrush for the 2019 British Open was going to be a challenge.

Ten days before he even arrived in Northern Ireland, Woods was already getting up at 1:00 a.m. to train for the tournament.

He even hit up 2019 U.S. Open champion Brooks Koepka to see if he could join him for a practice round (and got ghosted).

On Thursday, after hitting his first tee shot, Woods sent Golf Twitter into a frenzy of concern when he grimaced in pain.

please don’t do this to me @TigerWoods https://t.co/KEQDN5TBp0

So far he’s still hanging in there, but like I said, Tiger knew this Royal Portrush was not going to be easy.

Golf insider Alan Shipnuck reported that he heard a story about a discussion that took place between Woods and Rickie Fowler before the start of the tournament.

“What do you think of the course?” Fowler reportedly asked Woods when he saw Tiger in the locker room.

“It’s for men, not boys,” Woods reportedly replied without looking up from his phone.

Heard a good story this evening from a Euro Tour gadfly. Rickie bounds into the lockeroom and spies Tiger scrolling on his phone.
“What do you think of the course?” Fowler asks.
Tiger, without looking up: “It’s for men, not boys.”