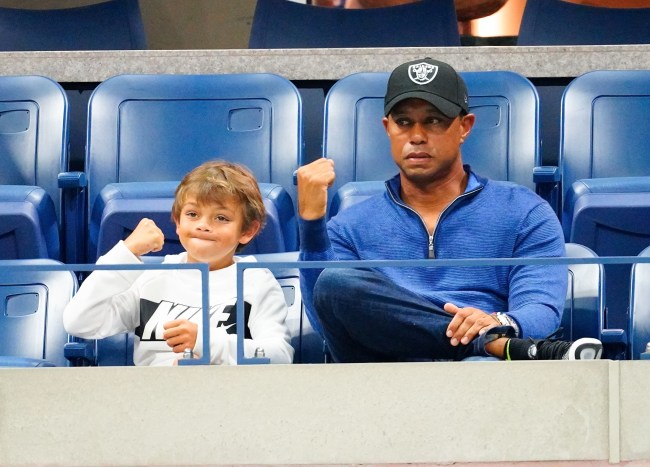 Tiger Woods is one of the most accomplished athletes ever, so it’s only fitting that his intensity, swag, confidence, intimidation and winning mentality rubbed off on his son, Charlie. While the younger Woods is still only 10 years old, apparently, he’s not shy when it comes to roasting some of his dad’s competition on the golf course — something his dad is also pretty well-known for.

According to Tiger Woods’ fellow golfer, Justin Thomas, Charlie didn’t hold back zinging him when the two encountered one another at The Masters earlier this year; a tournament Tiger won, which was his 15th major championship in his career.

While talking to the No Laying Up Podcast, Justin Thomas described the hilarious interaction with Charlie Woods, with the pro golfer talking about how, when in the clubhouse at Augusta to watch Tiger play the final four holes before capturing his fifth green jacket, Charlie roasted Thomas’ putting ability. Take a look at what the 10-year-old said to poor Justin.

“I just kind of saw (Charlie) and was like, ‘What’s up dude?’ And he just looks at me and goes ‘Oh hey look, it’s the guy who can’t putt.’ Thanks man, I appreciate that. I got a good kick out of that.”

Talk about a major shot to the ego, right? Considering Justin Thomas finished his final round at The Masters bogeying the 14th, 15th and 18th hole, it’s pretty sly of Charlie Woods to take notice and make sure he punked the golfer out. Boom. Roasted.

So, yep, even as Tiger Woods wrapped up his historic comeback victory at Augusta, he had his “mini me” getting the best of his competition, still F’ing with their psyche. That’s some A+ stuff, if you ask me.

It’s pretty awesome that Justin Thomas would even share this type of story, but, given the fact he’s gotten close to Tiger Woods and his family over the years, I’m sure the burn about his putting from Charlie felt more like a little brother busting his chops than anything. After all, Justin Thomas and Charlie are closer in age than he and Tiger are; which is kind of funny to even think about.