Tim Tebow And Stephen A. Smith Make A Bet For The Alabama-Florida Game 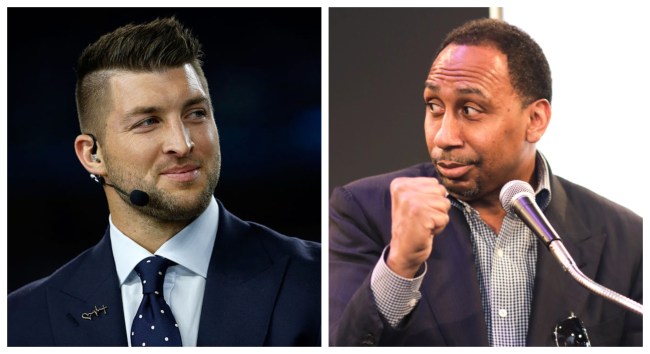 With Tim Tebow’s NFL career coming to an end for a second time, he’s back covering college football for ESPN and arguing with Stephen A. Smith on ‘First Take’ every Friday. The two got to talking about the matchup between Alabama and Florida and a friendly bet was agreed upon live on the show.

It was less of a discussion and more of just Smith laughing at the Gators, but Tebow is sticking with his alma mater and thinks that Florida can at least hang with the No. 1 team in the country on Saturday afternoon. Tebow was able to convince Smith that if the Gators hang around and lose by less than three touchdowns, Smith will have to wear a Florida tie on ‘First Take‘ next Friday.

It’s not a bad bet for Tebow seeing as how he literally has nothing to lose.

.@stephenasmith: "[Alabama's] gonna mop y'all right out of the state."@TimTebow: "If Florida is closer than that, how about next Friday you rock a Gator tie?" @stephenasmith: "Rock a gator tie? Done!" pic.twitter.com/QYwlf8v4eG

Most of Smith’s skepticism with Florida lies with the quarterback position, he doesn’t like what he’s seen from both quarterbacks even though he admitted to not having watched the Gators play at all this season.

“I see Emory Jones here,” said Smith. “Didn’t he throw four interceptions already in the first two games against those dudes? You got Anthony Richardson, now he can run the football – 275 rushing yards in the first two games, I’ll give him his props. Jacob Copeland, he looks alright. But they’re going up against Alabama. They’re gonna get mopped. They’re gonna get destroyed.”

Vegas has Alabama favored by 14.5 heading into The Swamp. That’s a lot of points to lay for a team going into that environment, but Alabama has looked like the best team in the country by miles through the first two weeks of the season. Don’t expect to see Smith wearing a Florida tie on the show next week.

Florida hasn’t beaten Alabama since 2008. The quarterback for the Gators that season? Tim Tebow.