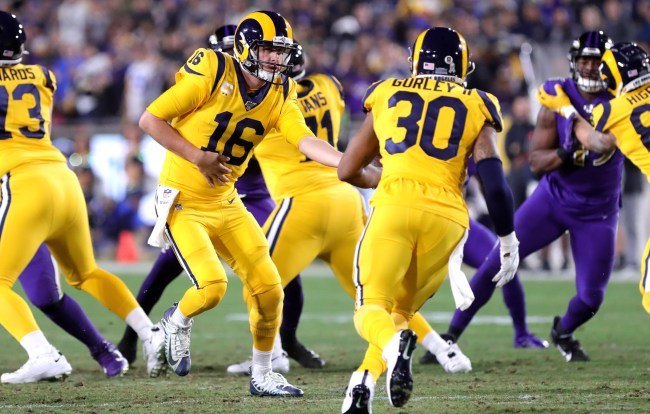 So, why are both of them now with other teams? Good question.

During an appearance this week on NFL Network, Gurley didn’t come right out and answer that question (though Goff may have hinted at it), but let’s just say he wasn’t shocked to see Goff follow in his footsteps out the door in L.A.

“Well, another situation where I wasn’t surprised again,” Gurley told NFL Network. “But you know, I like Goff, I like Goff, he’s a good guy. Don’t nobody care about who’s a good guy. I’m just happy he’ll be able to go somewhere and hopefully those guys welcome him with open arms and just not be judgmental and just let him play. He’s been a number one pick for a reason, and he has a lot of ball left in him. I just want him to be happy, and I just want him to be able to go out there.

“It could be a good thing for him, you know? Just add an extra chip on your shoulder. A lot of players like to play with chips on their shoulder, but it’s a lot different when you’re a franchise quarterback and you take your team to the Super Bowl and two years later you’re on a whole other team. Like I told him, man, love him, just want him to be happy and keep doing what you’re doing.”

Goff, who is still only 26, still has a real chance to reach his potential. Especially if he is playing, as he put it, “somewhere that I know wants me and appreciates me.”