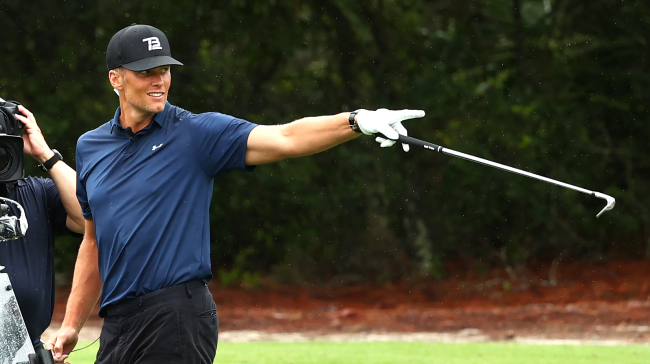 The fourth installment of The Match pitting Phil Mickelson and Tom Brady against Bryson DeChambeau and Aaron Rodgers has led to an unexpected entry into the hilarious trash talk fray: Charles Barkley.

While losing to Tiger Woods and Peyton Manning in May 2020, Tom Brady was criticized by Barkley – a notorious hacker on the links – and has apparently used that needling from Sir Charles as a bit of motivation for this latest round of The Match.

Brady’s performance was at times during The Match 2 so embarrassing that at one point he even asked Barkley – who has made tremendous progress fixing his godawful swing – for a little help.

Related: Tom Brady Splits His Pants While Bending Over On National TV During Sunday’s ‘The Match: Champions For Charity’

On Monday, during call to promote The Match 4, Brady admitted Barkley’s criticisms have gotten under his skin.

“I hope he starts talking trash on the practice range, because that definitely lit a fire under me,” said Brady. “Any time your golf swing gets insulted by Charles, you gotta take that to heart. I had a lot of insults, that was probably one of the worst insults I could imagine: Charles Barkley insulting my golf swing.”

Barkley will once again be working for Turner Sports on coverage of The Match sounds like he’s ready to take on Brady in a future edition of the made-for-TV event.

“He’s a really nice person; he’s a really nice person,” Barkley said. “I think he’s the greatest athlete arguably ever; I do, I truly believe that. He’s clearly the greatest football player ever, but I think he’s in the conversation with [Muhammad] Ali, Michael Jordan, Wayne Gretzky. Those are the greatest ever; that’s just my personal opinion. … I like to bash him because he got a great sense of humor, but I don’t think Tom can beat me in golf. I really don’t. Not right now he can’t.”

Mickelson, Brady’s partner for The Match 4, also said on Monday’s call that he knows Charles Barkley is going to be coming for them.

“The smack talk will be coming in on a high because Charles is coming in hot,” said Phil. “But you know what, I don’t think anybody can shut [Charles] up like Tom can shut him up.”

Phil emailed me this at 3AM can someone check on him? pic.twitter.com/Qpxwkhdfsh

Meanwhile, in the other pairing for The Match 4, Aaron Rodgers says he and his controversial partner Bryson DeChambeau have more in common than people might think.

“I think he’s often like myself sometimes,” Rodgers said during the news conference on Monday. “I think he’s a little misunderstood with his own career. I’m excited for him to get the opportunity for people to see him, because I think he’s a great dude.”

The Match will air on TBS, TNT, truTV, and fuboTV. The Match pregame show starts at 5 p.m. ET, with the competitors teeing off around 5:30 p.m. ET.

[For The Win, Golf Digest, ESPN]