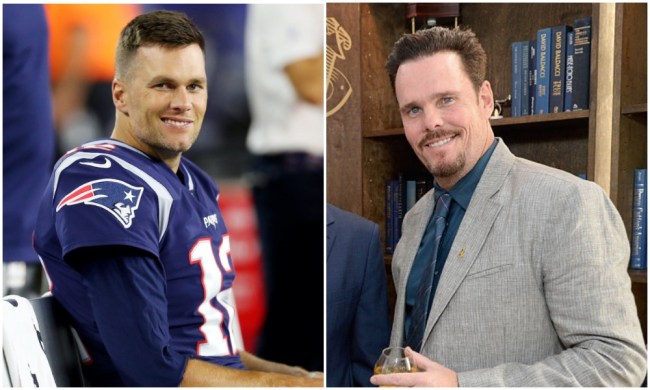 When Eli Manning bailed last minute on his agreement to make a cameo appearance on HBO’s hit show ‘Entourage,’ the show’s creator Doug Ellin had to scramble to get the next best thing. That next best thing was Tom fucking Brady. Ellin, who was in sheer panic as they were set to film in two weeks, decided to make a call to Mark Wahlberg, who the show was based on. Within hours, Wahlberg tells Ellin not to worry about it, he just so casually made a phone call to Brady who agreed to come on the show instead.

Kevin Dillon, who played the role of everybody’s favorite character Johnny Drama, recently joined The Brilliantly Dumb Show and described the moment he met the GOAT on set.

“When Brady walked in that morning we were all hanging out getting ready to shoot with him, we were in our wardrobe and had just gone through make up,” Dillon explained. “So, we are hanging out in the bar throwing darts, it’s maybe 6 or 7 AM. So Brady walks in and goes, ‘hey I’m Tom Brady, and we were like yea of course no shit bro.’ And he’s like ‘oh you guys are throwing darts huh? You mind if I throw a few?’ He grabs three darts, he missed the first target by just a fraction, then he throws two more, bullseye, bullseye. He then walks away after back to back bullseyes and goes, ‘hey, I’ll see you guys out there!’ And walks away.”

During their lunch break, Dillon and Brady snuck out to play 9 holes.

“I walked around and played 9 holes with him, his beautiful wife and kid. He is really good.”

The ‘Entourage’ cast, which was mostly made up of Giants fans, went on to explain how hard it was to root against Brady after seeing how nice of a guy he was. Kevin Connolly, who played ‘E’ in the show, spoke about Brady agreeing to come on the show last minute.

“The thing with filming with these guys, obviously as a New York fan you are trained to hate Tom Brady,” Connolly explained. “And then Brady comes through for you in the clutch for the show, shows up to do the movie. He is the nicest guy in the world, Gronkowski was awesome, Edelman was great, the list goes on and on and you think, these Patriots are the nicest guys in the world.”

It was a small piece to what ended up being an incredible interview with the ‘Entourage’ cast and creator. The stories they have from filming eight seasons and a movie are endless. Be sure to subscribe to The Brilliantly Dumb Show on Apple Podcasts, Spotify and YouTube.