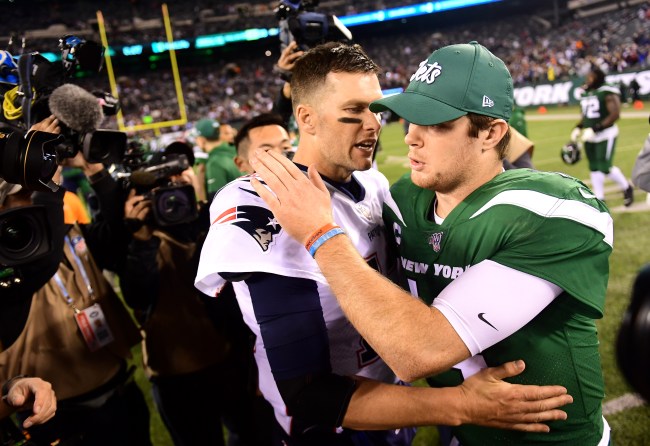 Tom Brady has always tried to be a pretty private person. Whether that’s naturally his way of doing things, or instilled in him by his head coach Bill Belichick, the six-time Super Bowl winning quarterback has never been one to just give his opinion on everything. Call it the Patriot Way, if you will.

While the GOAT has definitely peeled back the curtain in recent years — taking to social media to engage with his fans, celebrate victories or post pretty cool videos of himself training — for the most part, Tom Brady keeps to himself and doesn’t want anyone else to learn the secret to his success. And, just when you thought Brady might give us more insight from his days on the football field, he squashed that notion thanks to that unfortunate mic’d up situation from the Monday Night Football game earlier this week.

For those who forgot, during the game, New York Jets quarterback Sam Darnold was heard saying he was “seeing ghosts” when facing the Pats’ defense. The soundbite has gotten plenty of attention, with Jets head coach Adam Gase pissed that ESPN aired it, and Darnold’s teammate, Le’Veon Bell, claiming the network did “Sammy dirty.”

In the wake of all this, Tom Brady stepped up and pretty much claimed that he’ll never seek the opportunity to be mic’d up moving forward. As a guest on WEEI’s “The Greg Hill Show,” Brady offered up a pretty interesting explanation as to why the whole mic’d up thing just won’t be for him anymore.

“It’s not typically something that I do,” Brady told WEEI’s “The Greg Hill Show.” “I kind of leave that for other guys to have opportunities for them to get some of the things that quarterbacks usually get.”

And in the wake of #GhostGate — in which many believe NFL Films hung Darnold out to dry by airing his vulnerable remark — Brady added he hasn’t particularly enjoyed his own experiences being wired for sound.

“I definitely think you’re aware of it. I think for the most part, you’re focused on the game, but it is a little different,” Brady said. “The pack that they put on you can be a little cumbersome for me.”

Aside from general discomfort, Brady — like Darnold — would prefer his interactions with teammates and coaches remain private.

“You have a very intimate relationship with players you play with,” Brady added. “Things that are said in the heat of the moment, for people to take those out of context, not understanding the emotional part of the sport, they get taken the wrong way. So, that’s just part of entertainment. That’s just what they’re trying to do with those media types of things.

“I think for me during game day, it’s just best for me to focus on my job, what I need to do, not add anything extra to what my obligations already are, which is to go out there and be a great player for my team.”

And this, right here, is why we can’t have nice things. Thanks a lot, ESPN mics.

Obviously, Tom Brady has been mic’d up in the past, but given his explanation above following Sam Darnold’s bad experience with a hot mic, it doesn’t sound as if we’ll ever get to hear what the GOAT is saying to teammates, coaches and opposing players. That’s kind of a bummer, because there are some pretty cool moments that come from those situations.