Tony Romo Has An Intriguing Theory About Tom Brady And Retirement, Makes A Jordan Comparison 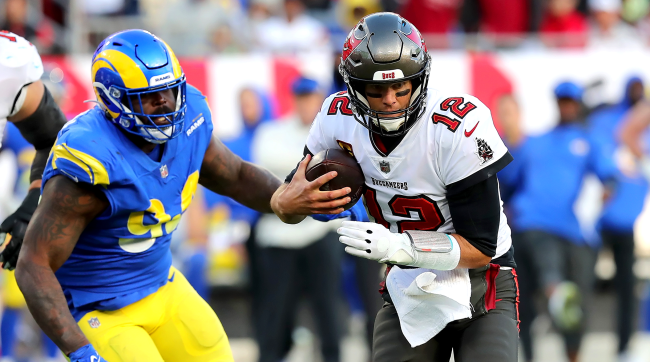 Could Tom Brady pull a Gronk and just sit out a year or two and then come back at the age of 46 or 47? Tony Romo thinks so.

While the football world eagerly awaits Tom Brady’s decision about whether or not he is going to retire, Tony Romo is over here thinking outside the box.

Romo, who does a killer Tom Brady impression, appeared on CBS Mornings on Friday along with his broadcasting partner Jim Nantz to preview this weekend’s AFC and NFC Championship Games.

Romo added that he hadn’t spoken to Tom Brady about his retirement decision, but he has some idea of how it will go down.

“I think when he wins it, I think he’s the opposite of some people, like, that’s when he goes away, is when he loses. Because it’s actually like, okay, we’re not winning. I’m want to see if I can be the first one to win three in a row. You know? There’s always this other ‘thing.'”

“It’s like once you don’t have that ability, which I think is getting close here, I think this is how he walks away,” Tony Romo continued. “Because the challenges… it reminds me of Michael Jordan. When Michael Jordan retired after the first three championships it was because he was like, what else do I have to prove? Magic and Larry didn’t win three in a row … He’s got seven titles. Jordan had six. He has the most championships in sports, in modern day, we could argue.

“But at the end of it I actually think, I think sneakily, there’s a chance Tom Brady retires and may come back in two years. This is just crazy, but he’s like a bionic man. Well, he’s not hurt, he’s still playing great, he may need to refresh like Jordan and go two years away and maybe start another challenge. Because otherwise there’s nothing left for him to prove.”

That, my friends, is certainly a theory.

Brady, who led the NFL in completions, passing yards and touchdowns this year at age 44, did once say that he didn’t think it wouldn’t be difficult for him to play until he’s 50. What he didn’t say was whether that would involve skipping a year or two to get it done.

Related: Tom Brady Fires Back At Tony Romo And Peyton Manning For Saying He Is Slow