Topps Had To Retouch All The 2022 Cleveland Guardians Baseball Cards: Take A Look 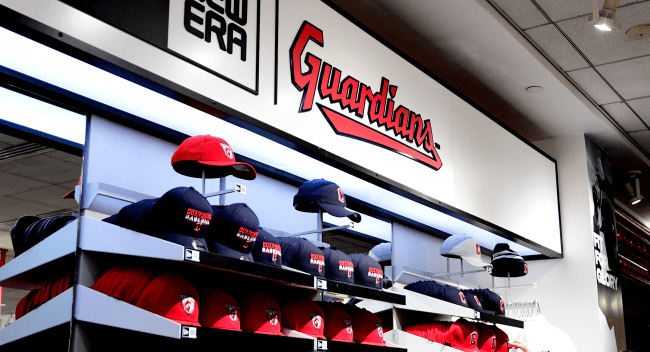 When the Major League Baseball franchise in Cleveland announced back in July that they would be changing the team’s nickname from Indians to Guardians the reactions were, as expected, mixed.

Some baseball fans liked the change and think it was way past overdue, while others were wrong.

One thing that most fans probably overlooked, however, was what are the baseball card companies like Topps going to do for photos of Cleveland’s players in 2022?

Sure, they could have just used some pictures of the Cleveland Guardians roller derby team, but that just wouldn’t be the same.

Naturally then, when Topps dropped the 2022 Topps Baseball Series I on Feb. 15, baseball fans had questions.

When did Jose Ramirez wear this Cleveland Guardians jersey? pic.twitter.com/1DSHmhuIeo

Related: Fernando Tatis Jr. Is Being Recruited By A Mexican Professional Baseball Team, He Responds

According to a Topps spokesperson who emailed The Athletic, “As we always have, we retouched images on cards throughout our collections to reflect Clubs’ current branding and identities. This consistent practice provides fans with the most up-to-date collectibles representing their favorite players and teams.”

Not everyone appreciates all the effort Topps went to in making the new Cleveland Guardians baseball cards though.

“It’s not gaslighting,” David Roth, a writer at Defector and former Topps editor, told The Athletic. “It is fundamentally a break in what a card should represent. It is different, not just as a rebranding sort of deal. This is conscious attempt to change the way a team is seen and referred to and represented. There are ways around it that don’t involve in creating something that didn’t exist.”

Topps retouched 2021 action photos to make the Cleveland Indians into the Guardians for its 2022 baseball cards. With the MLB owners strike pushing the season back, card makers could be forced into more retouching.https://t.co/gaB6nOxP1Y

It is odd to see a player in a photo on a baseball card wearing something that he didn’t actually, you know, wear.

The 2022 Topps Baseball Series I includes Cleveland Guardians action photos, even though the rebrand happened after the season.

Was the decision to retouch the cards made by Topps or Major League Baseball?

This problem with the change in Cleveland’s team nickname on baseball cards is amplified by the fact that with no Spring Training, baseball card manufacturers have not had a chance to photograph players in uniform this year.

Thankfully, once the season begins that won’t be a problem… assuming it ever does.