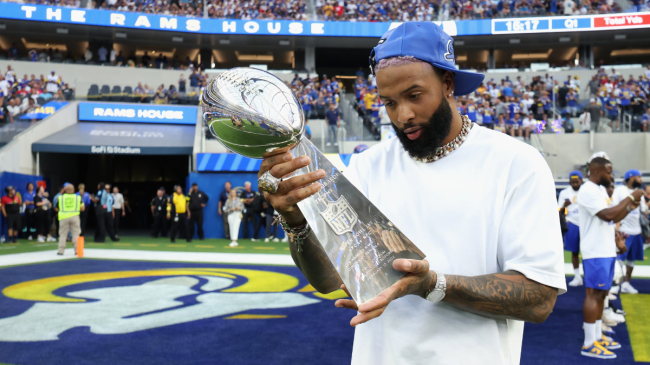 The Kansas City Chiefs are in the market for an offensive playmaker. The potential Super Bowl contenders feel they’re just one piece away from being the best team in the AFC.

That reality might’ve come following last week’s 24-20 loss to the Bills, where the unit was held to less than 400 yards of offense and two touchdown drives.

Rumors have begun to surface, saying KC could look to nab a wideout on the free agent market. This, coming after the team traded star pass catcher Tyreek Hill to the Dolphins this past offseason.

In an attempt to make up for that lost production, the team signed Juju Smith-Schuster and Marquez Valdes-Scantling. That pair has provided explosiveness, but the front office may look to add one final piece.

Earlier this week, star tight end Travis Kelce restructured his current contract to open up some room in the salary cap. That move seemed to signal an imminent move in free agency.

Some looked to the Panthers, who could be offloading talent as they look to start a rebuild. Fans singled out Christian McCaffrey or DJ Moore as options. Kelce, though, is looking elsewhere.

With the extra money to work with, Beckham has become a potential target. If things work out the way that Kelce wants, OBJ will be playing in Kansas City before season’s end.

Here’s what the tight end had to say about the possible addition on his New Heights podcast.

“It’s a start to a move, right? Like, you’re freeing up cap space to be able to do something… I want [the OBJ rumors] to come true. I have not heard anything in the locker room or anything around the facility… but I think something’s in the air, for sure, and if it means OBJ, alright.”

Should they add OBJ, the Chiefs would be getting a Super Bowl champion who caught five touchdowns through eight regular season games with the Rams. In the playoffs, he tallied 21 receptions for 288 yards and a pair of scores.

Beckham appeared on his way to a potential Super Bowl MVP award (2 rec, 52 yds, 1 TD) before tearing his ACL in the Rams’ final game. That injury has kept him off the field in 2022, though a November date return has been set.

Over his career, OBJ has made headlines with some absolutely ridiculous catches. Now, imagine that playmaking ability with Patrick Mahomes throwing him passes.

It could be a perfect match for the Chiefs. At least, that’s what Travis Kelce is thinking.