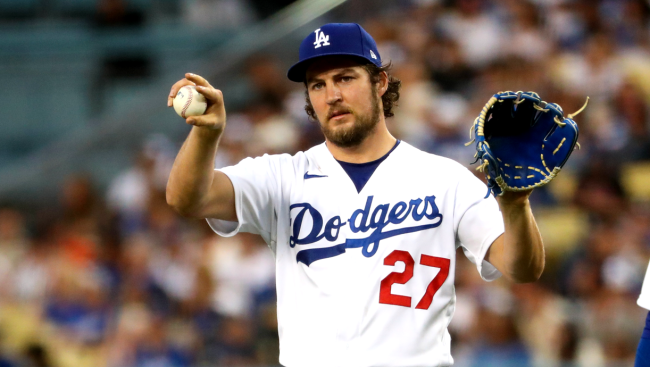 Trevor Bauer filed a motion on Tuesday to dismiss the lawsuit his sexual assault accuser, Lindsey Hill, filed against him.

The 31-year-old Bauer, who is currently suspended by Major League Baseball, also shared a video that was included in the motion which he says shows that Hill is lying about her injuries.

The pitcher, who is still under contract with the Los Angeles Dodgers, was suspended for two years by Major League Baseball despite never being charged with any crimes.

Hill is suing the 2020 National League Cy Young Award winner in a counterclaim to Bauer’s lawsuit against her for defamation.

Lawyers for Lindsey Hill claim Bauer used his fame and wealth to wage an “organized smear campaign to falsely and maliciously denigrate Hill and other victims.”

This week, TMZ obtained a copy of a new motion filed by Bauer’s legal team which includes what they claim is video proof Lindsey Hill is lying about her injuries.

“She appears to be willingly in bed with a sleeping Mr. Bauer, and is smirking and uninjured,” Bauer’s attorney’s wrote.

The video, reportedly recently received from the Pasadena police department, was also shared on social media on Wednesday by a Twitter account with the username @just_krissy19.

The video shows Bauer’s accuser smiling and unmarked, lying in bed next to Bauer who appears to be sleeping with a sleep mask over his eyes.

Trevor Bauer retweeted the video on his Twitter account with the caption, “This was taken hours after I supposedly brutally assaulted this woman, when she claims she was terrified and desperate to get out of my house and in tremendous pain.”

Yesterday I filed a motion to dismiss Lindsey Hill’s counterclaim in the U.S. District Court for the Central District of California Southern Division. You can read the response and view each of the four exhibits attached here: https://t.co/ey6IJl5R5F

The video lasts nine seconds, with no sound. Dodgers pitcher Trevor Bauer appears to be asleep in bed, with a mask over his eyes. Next to him in bed, his attorneys say: the woman whose sexual assault allegations against Bauer triggered the investigation that resulted in his two-year suspension from Major League Baseball.

The woman took the video herself, according to attorneys for Bauer. On Tuesday night, in asking a federal court to throw out the woman’s claim against Bauer for sexual battery, the attorneys included in their court filing a video they said was obtained from the Pasadena Police Department and taken at Bauer’s home after he allegedly injured her during a sexual encounter on May 16, 2021.

In February of this year, the Los Angeles County district attorney’s office decided not to press charges against Bauer in relation to Hill’s complaints.

“After a thorough review of all the available evidence, including the civil restraining order proceedings, witness statements and the physical evidence, the People are unable to prove the relevant charges beyond a reasonable doubt,” read a statement from the Los Angeles County district attorney’s office.

Hill was also denied a request for a permanent restraining order against Bauer in August of 2021 when Los Angeles County Superior Court Judge Dianna Gould-Saltman found Hill’s petition to be “materially misleading.”

Trevor Bauer says he has proof his accuser admitted in writing that at least one of their sexual encounters was "consensual." https://t.co/lIqwMsDiik

“Her countersuit is a regurgitation of her judicially disproven claims and yet another attempt by Ms. Hill to defame Mr. Bauer and seek to profit from her lies,” Bauer’s attorneys wrote in a statement addressing Hill’s countersuit.

By the time his suspension is completed, Bauer will have been forced to miss a total of 435 games including those he was held out of due to being put on administrative leave by Major League Baseball in June 2021.