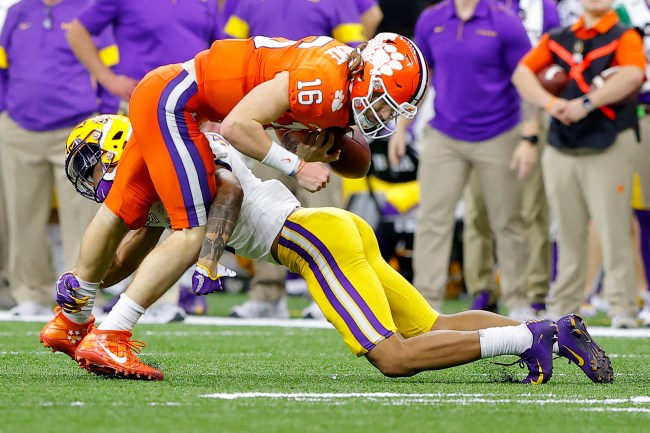 When most people think about Trevor Lawrence, they envision the ideal quarterback. The current Clemson Tigers signal-caller is tall, strong, has a rocket for an arm, can scramble for yardage when need be and is tough as nails, proving that, if there were ever a perfect player at the position in a video game, he would be closest to it.

Widely-considered as one of the top prospects in next year’s NFL Draft, Trevor Lawrence is perceived to be the closest thing to a sure thing since Andrew Luck in 2012 and Peyton Manning in 1998. Only time will tell if Lawrence lives up to all the hype and expectations, but, for now, we’re left overly critiquing him — just as ESPN analyst Ryan Clark recently did.

Clark, appearing on Get Up Tuesday morning, handed out tons of praise while talking about Lawrence, but was quick to throw the kid under the bus, too, stating that he was less than impressed with how the quarterback performed when the stage was the biggest. Specifically referencing the National Championship Game against LSU — one in which Lawrence threw for just 234 yards, zero touchdowns, zero interceptions and added 49 yards and a touchdown on the ground in a 42-25 loss — Clark seemed to pump the brakes on the love for Trevor Lawrence, even going as far as saying he doesn’t see him as a “transcendent” player.

“He has it all; he’s tall, he has a cannon, he understands the game, but being on the sideline against LSU in the national championship, he was off and he wasn’t good,” Lawrence said. “You can speak about 394 passing yards, but I’m talking about the arrant throws. I’m speaking of having Tee Higgins, who was an early second-round pick, and Justyn Ross on the other side with Travis Etienne, and not being able to move the ball and it largely being Trevor Lawrence’s fault.

“Do I think he has every measurable you need? Do I think he’s going to be an excellent professional football quarterback? I do. But right now, looking at Trevor Lawrence — even though he has a transcendent talent level — I have not seen a transcendent football player.”

It’s an interesting take from Clark here, because, while Lawrence dominated Alabama in the 2019 National Championship Game — which was sort of his coming out party as he tore apart Nick Saban‘s defense for 347 yards and 3 touchdowns — he didn’t show the same type of skills against LSU. That might be a lot to ask of the dude, but, remember, the ESPN analyst is simply saying he doesn’t know if Lawrence has shown enough to be the once-in-a-generation player most people have already dubbed him.

Clark continued to state his opinion, adding the below while on Get Up:

“You go early last season, he struggled. Then he hit a stretch against ACC talent that we barely even got to watch, and I only watch because of this job,” Clark said. “We saw him struggle against Ohio State, which is when I gained a lot of respect for him, because he found other ways to get a win. But in the biggest moments, in the best of times when they needed him last year, I don’t think he was great. And that is important to remember because the two times we needed Deshaun (Watson) as a Clemson Tiger, he showed up against Alabama and he was spectacular, he was the best player on the field. I haven’t seen that from Trevor Lawrence.”

With no live sports currently going on because of the pandemic, and uncertainty surrounding the upcoming college football season, Ryan Clark may just be looking for a way to stir up some controversy and create some debate. Remember, Manning never won a national title and seemed to struggle in big games while in college, and he became one of the NFL’s all-time greats, so maybe Trevor Lawrence will have a bounce back season in 2020 and prove to Clark (and any other doubters) that he’s got the clutch gene teams crave in superstars.