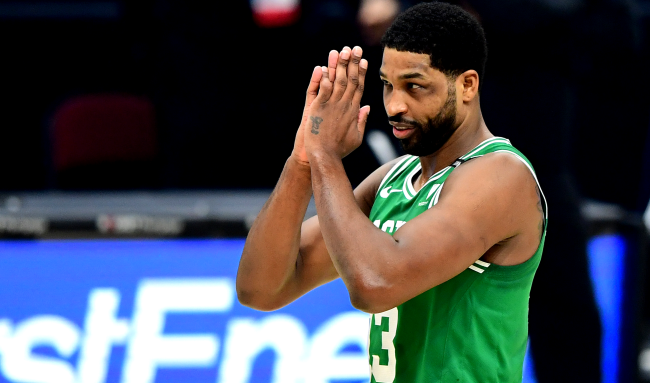 Is there anyone in the world of sports, outside of Antonio Brown, who has more drama in his life than NBA player Tristan Thompson?

In fact, one could easily argue that Thompson’s many issues are even more magnified merely because of the fact that he is married to and his a kid with one of reality TV’s leading ladies Khloe Kardashian.

Thompson just can’t seem to do anything without getting into some kind of sticky situation these days.

Now, a woman who accused him of fathering her child, Kimberly Alexander, claims that the paternity test Tristan Thompson took was done improperly and is demanding that he take a second one.

Which, considering he sued her for libel and she didn’t show up for court this week, kind of makes her claims seem less believable. And he wants her to pay.

According to court documents obtained by Radar, Alexander failed to appear this week in court after being served with a notice, so now a judge will decide what kind of restitution she owes Thompson.

Thompson, who has admitted having sex with Alexander, is seeking $100,000 in damages, plus additional costs, for “loss of reputation, shame, mortification, and hurt feelings.”

What exactly are “hurt feelings” worth these days? And mortification? That’s got to be costly since I had to actually look up exactly what it means.

“Alexander turned to social media and falsely accused Thompson of sabotaging the DNA test results in order to avoid his parental responsibilities, and she falsely stated that Thompson is the father of her son and she claimed that Thompson has been “neglecting” the child since birth,” stated Thompson’s attorneys.

“Alexander further falsely accused him of manipulating and sabotaging the DNA test results, which has a significant detrimental effect on Plaintiff’s career as a professional athlete and brand endorser.”

Thompson claims Alexander’s accusations call into question the morals clauses in the contracts he has for brand endorsements.

Right. This will be the one thing that will get them to drop Thompson from their deals with him.

Can someone out there in TV land just go ahead and give Thompson his own reality show? He’s got that Kardashian connection so he should already have some decent connections in that world.