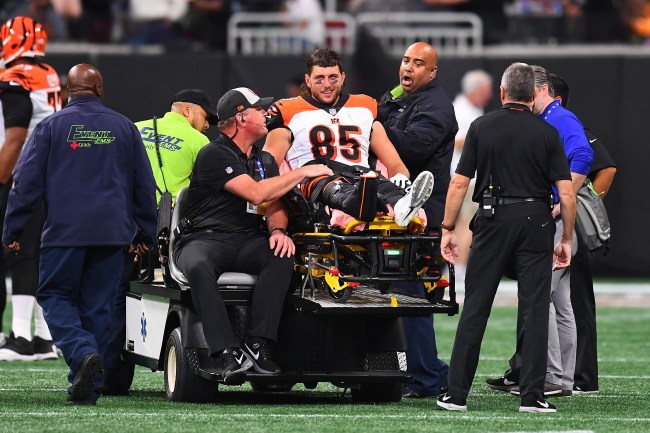 It’s been a shade under five months since Bengals tight end Tyler Eifert suffered a devastating ‘So Gross You Have To Look” ankle injury during a September 30th game against the Atlanta Falcons.

Falcons linebacker De’Vondre Campbell fell on the 28-year-old’s right ankle snapping it in an unnatural direction. The shittiest part of the injury is that it happened right when Eifert was beginning to solidify himself as a lethal weapon in the Bengals offense. In recent years, the oft-injured pass catcher hasn’t really had an opportunity to break out, missing significant chunks of 2016 and 2017 with back problems. He’s only played in double digit games twice in six seasons.

Check out the injury below if you want to torture yourself.

Not enough self-inflicted pain? Look at these images of his impossibly swollen leg and ankle post-surgery.

It was reported that in January of the new year, Eifert had begun a light jogging routine, for up to 20 minutes at a time. Flash forward over a month and Eifert seems to be making great progress on a ankle that looked like it’d take longer. Check out the video he uploaded to his social media.

Looks a lot better than the last time you saw my ankle! #LETSGO 📈📈 pic.twitter.com/DW2HfjSD8s

Eifert enters the offseason as an unrestricted free agent for a second straight year, and could be leveraging social media to let teams know he’s working back to full health.