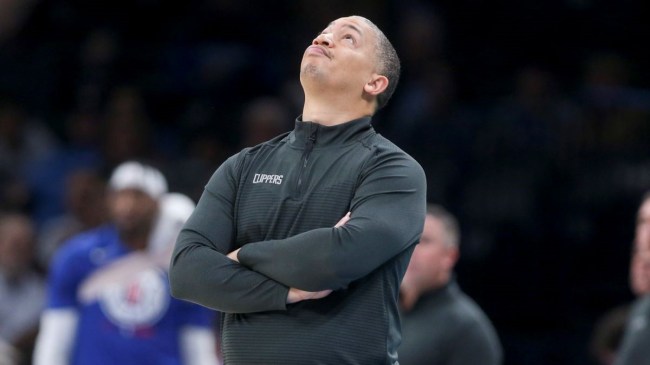 This was supposed to be the year for the Los Angeles Clippers. After injuries derailed the Clippers’ 2021-22 season before it even started, they’re back healthy and better than ever to start the 2022-23 season.

LA entered the year as the favorite to lift the Larry O’Brien trophy as NBA champs according to DraftKings Sportsbook. But the train has quickly left the tracks early in the season. Los Angeles currently sits at 2-4 and well outside the (very) early playoff pictures.

And the numbers match the record as well. Despite boasting perhaps the best 1-2 punch in the league with Kawhi Leonard and Paul George, the Clippers rank dead last in scoring at 100.7 points per game.

LA coach Tyronn Lue had finally seen enough following his team’s 112-91 blowout loss to the New Orleans Pelicans on Sunday. Lue said what everyone was thinking and took a swipe at his underperforming players.

Just about every member of the organization showed frustration following the loss to New Orleans. But perhaps nobody was as frustrated as Lue, who is in his third year as the team’s head coach.

“We are not a very good basketball team right now and we got to change that,” head coach Ty Lue said. “We all got to be better. Look at the mirror and not at the window… To be 27th in the league in scoring, that’s terrible with all the talent we have.”

George, who is shooting just 38.8 percent from the field and 25.7 percent from deep, echoed those sentiments.

“I think we just gotta raise the intensity,” he said. “It comes down to identity; who are we gonna be? With that, we just gotta raise the intensity on both sides. It starts with me. I was poor tonight, I’ve been poor the past couple games. I’ll get it together. I’m committed to my work, I’m committed to this team succeeding. It starts with me. I gotta get better, I gotta be better. But then collectively we have to be a better team and have an identity when we’re on the court.”

If LA doesn’t get the ship righted, things could end up getting pretty ugly, pretty quickly.