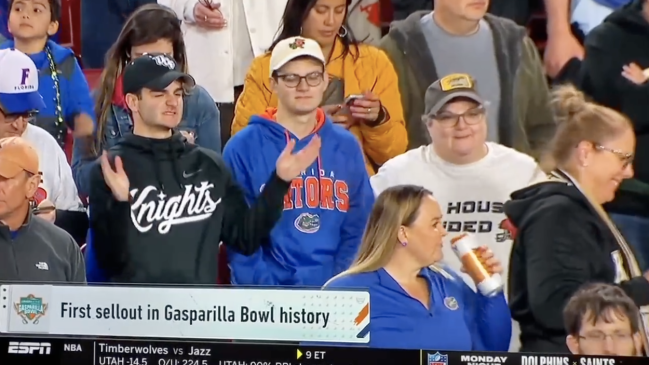 Thursday’s Gasparilla Bowl saw the first sell-out in the game’s 13 year history. It pit a .500 Florida team that snuck into bowl eligibility against in-state foes UCF.

The Gators have refused to play the Knights in recent years, so the game meant a lot to both sides, but a little bit more for those from Orlando. As a result, the stadium was filled to the brim with black and gold, with only a smattering of blue and orange sprinkled in.

When the ESPN broadcast of the game began, it opened with a pan of the stadium. It cut between different groups of fans in the stands, and one UCF faithful got totally exposed in 4k.

As the camera turned in his direction, the band was playing some sort of pro-UCF cheer. The fan, in an effort to clap along, could not. He simply couldn’t do it.

The fan tried three times to get it right. He brought his hands closer together, as if he was about to clap, on three instances, but pump-faked all three times before finally slapping his hands together way off-beat.

He knew what he did, he knew it was a struggle.

The fan turned to his Florida friend on his left and let him know that he messed up. It wasn’t even particularly close.

But he wasn’t done there. The UCF fan joined in on the cheer and then went to clap off-beat once again before the camera cut away.

this was so bad lol I’m sorry kid pic.twitter.com/jeIg0psbXl

It was a poor performance from the rhythmically-challenged UCF fan, but his team went out and beat Florida on the field. So, all in all, it was a net positive.

Even still, you just know his group chat was popping off and roasting this poor fella for being on the wrong end of the ESPN broadcast.