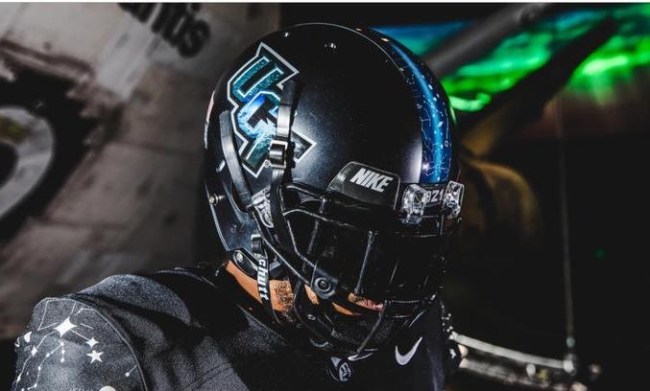 The 10th-ranked University of Central Florida is currently in the midst of a 20-game winning streak stretching back to last season, where they were denied a spot in the College Football Playoff despite an undeafeted record and some admittedly questionable reasoning that “proved” they were the best team in the country last year.

On Saturday, UCF will look to extend their streak even longer when they face off against Temple (which they will probably do because they’re playing Temple) while rocking uniforms that are so fire they may burn down the stadium.

According to USA Today, the school will be celebrating their long-time connection to the space industry (they founded a program in the 1960s as the Space Race started to heat up) with some galactic-inspired uniforms that are sick enough to put you in the emergency room.

The jerseys are filled with Easter eggs like the Citronaut, which was formerly the school’s mascot.

They’ll also be rocking Pegasus on their helmets which will be complemented by the constellations dotting the uniform.

Those constellations also have some special significance as they map out the UCF campus, with buildings representing stars connected by the school’s roads.

The helmets also feature the coordinates of the 50-yard line at Spectrum Stadium, which lies on the exact same latitude as one of NASA’s most historic launch pads.

I can’t tell you if the school will be selling the uniforms to the general public, but if they are, I’d like to ask anyone who might wander into the bookstore this weekend to simply name their price.