UFC Champ Max Holloway Slid Into Tom Brady’s DMs Out Of Nowhere And The G.O.A.T Responded!

UFC champ Max Holloway is one of the most successful fighters to ever enter The Octagon. He holds the current record for the most ‘significant strikes’ landed in a fight and he threw over 700 punches in his last fight. He also recently slid right into Tom Brady’s DMs on Instagram out of nowhere and the G.O.A.T actually responded! Max shares this story in the video above around the 8-minute mark of the video. It’s pretty cool to see an athlete as successful as Max Holloway geek out over another athlete like this.

The Hawaiian-born fighter (full name Jerome Max Keli’i Holloway) first became UFC Featherweight Champion back in 2017 and successfully defended his title three times. At this point in his life, the 29-year-old fighter really is at the peak of his career which has made the past two years pretty wild. At any other point in history, he’d be fighting 3 to 4 times a year and these would be title fights but he only fought once last year and once so far this year.

In this latest episode of Card Clout with DJ Skee, Max discusses how surreal it was to fight at UFC’s ‘Fight Island’ last year and he bets a pair of match-worn gloves against some crazy rare rookie cards including Tom Brady, Randy Moss, and Barry Sanders rookie cards. The two guys open up a box of cards in search of a Tua Tagovailoa rookie card going pack for pack and whoever ends up with the better cards at the end wins.

When asked about what it was like experiencing the UFC’s Fight Island last year, here’s what Max said “Fight Island was crazy. We pretty much quarantined for 5 days. We got Hawaii to Vegas to Fight Island. You lose a day when you’re flying there. And it’s an 18 and a half hour flight.
It’s so crazy, the first time that we fought in Fight Island I fought in local time at 8am in the morning. The person that you’re quarantining with is like the only person that you can train with for those four days that you’re in a hotel.”

One cool moment in the interview came when DJ Skee asked Max if there’s anything left in Max’s career that he wants to accomplish (spoiler alert: there is). Here’s what he had to say: “When the fame is done and the lights are gone, that’s the thing that people aren’t ever going to be able to take away from me. That’s the kind of stuff, records and legacy, that I want to leave behind so when people are looking back 20 years from when I’m gone they go ‘whoa, who is this guy??” In my last fight, I threw something like 700 punches. I want to throw a thousand punches. That’s one of the things (I want to accomplish still).

The two then go on to open up some UFC cards which are an excellent value purchase because the Football, Baseball, Basketball, and Pokemon markets are so crowded. Max runs through and gives props to some UFC fighters like Ronda Rousey who he says “for women MMA she’s the one” and then talks about the completely freakish physical build of Yoel Romero. He said Yoel’s like an “action figure, have you ever seen this guy in real life? The guy feels like Vibranium from Wakanda.”

Then they move onto other cards and when they get to the Tom Brady rookie card, Max shared this cool story:

“I actually DM’d him on Instagram. I told him ‘thank you for the inspiration, Tom’. And he wrote back and he said “you’re a beast, Max, keep pushing. And I was like this is crazy, this guy replied to me. I just tried my shot. This guy is the greatest of all time.” 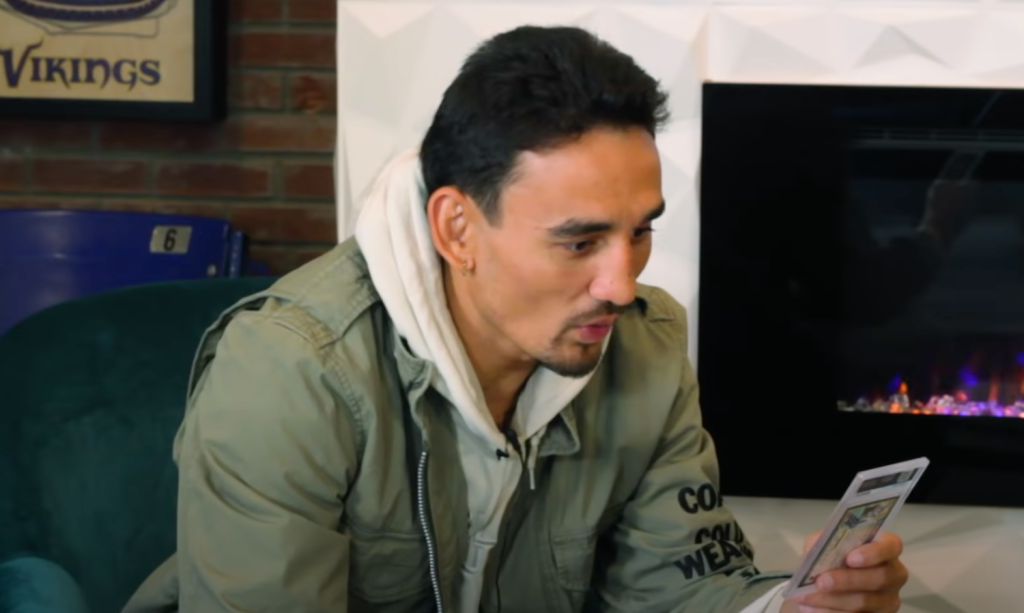 Then it turns to the bet. I’ll let you watch the video to see who wins the match-worn gloves or the collection of rare rookie cards.