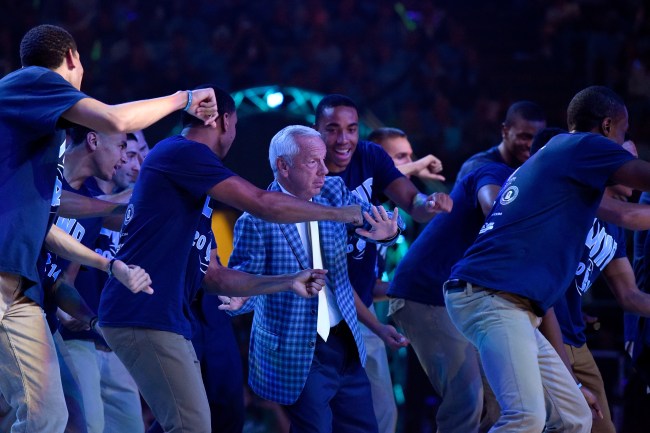 The UNC hoops team is coming of a forgettable 2019-20 season which saw the Tar Heels go a pathetic 14-19 prior to the college basketball season being cancelled because of the pandemic. This all came after landing one of the nation’s top recruits at the time, Cole Anthony, and peaking at No. 5 in the AP rankings. To say head coach Roy Williams and his staff just turned the page on last season is an understatement.

Like any blue chip program does, though, UNC hoops wasn’t going to stay down for too long. Places like that reload each year, adding some of the best talent in the nation — and having some guy named Michael Jordan as a former player sure does help the pitch to prospects. Want to know what else kind of helps? First, racking up a dinner tab at Ruth’s Chris for over $2,000, then spending a total of a reported $11,000 in the two-day span; which is exactly what the Tar Heels reportedly did during a weekend with two 5-star recruits, Caleb Love and Walker Kessler.

According to a recent article from The Athletic, Kessler and Love — No. 14 and No. 18 respectively on ESPNs 2020 hoops rankings — came to Chapel Hill for their standard recruiting visit. Instead of just showing the highly-coveted kids the facilities, the championship rings, the banners with names like “Jordan” and “Worthy”, the team busted out the big guns, swiping that corporate credit card like they knew no limits.

So what does it take to spend over two gran on food at Ruth’s Chris? Take a look at the bill below.

Rare insight into the process at UNC from @BrendanRMarks as he examined the weekend that led to Caleb Love and Walker Kessler committing.

Let’s just assume there were four people at that dinner — Roy Williams, the UNC hoops basketball director, Caleb Love and Walker Kessler — simple math tells us that that’s an average of $523.59 per person. That’s a helluva lot of grub. Plus, that’s without any alcohol, which always adds hundreds to a bill when all is said and done. One must be impressed with that kind of appetite.

After stuffing themselves silly? Well, the recruits spent time with their player hosts, each of whom was reportedly given $150 for entertainment for the weekend. One can only imagine what that cash went towards.

I know this is probably par for the course in college basketball recruiting, but seeing the UNC hoops team spend $11,537.36 in basically 48 hours is just absurd to me. Remind me again why college athletes can’t be paid when this type of loot is being tossed around during recruiting weekends?

With stuff like this going on (), it’s no wonder why we hear reports of improper benefits being handed out to recruits like Love and Kessler. Remember, just last year Zion Williamson’s former marketing agent claimed the baller’s stepdad received cash and other benefits for Zion to attend Duke. So, while none of this should probably be surprising, seeing such a steep bill for just two days with a couple of recruits is still insane.