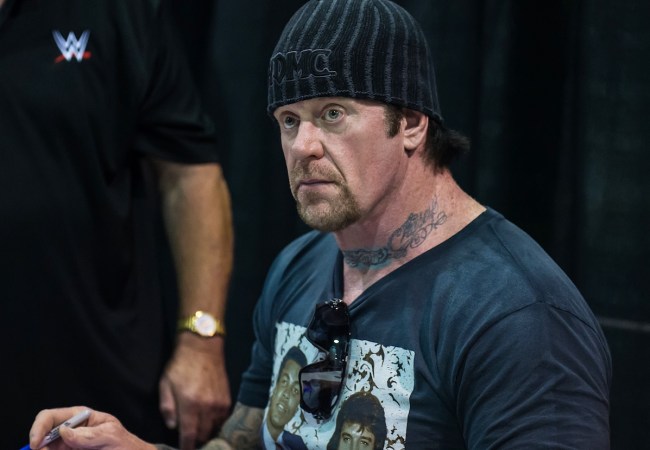 Former WWE star The Undertaker, was a guest on “The Joe Rogan Experience” this past January. The future Hall of Famer discussed his career, life, and his views on the wrestling business today.

The interview is now over a month old and the wrestling world is still discussing Undertaker’s comment about performers of today being “soft” compared to the wrestlers during his 30 year run in the business.

Here’s a transcript of Undertaker’s comments from Forbes.

“The product has changed so much and it’s kind of off. I’ll probably piss a lot of people off but they need to hear it. It is what it is. To the young guys [who think] he’s a bitter old guy, I’m not bitter. I did my time, I walked away when I wanted to walk away. I just think the product is a little soft. There’s guys here and there that have an edge to them but there’s too much pretty and not enough substance I think right now.

One of the big things that happened was that the generation before, we all got old at the same time so there weren’t enough guys to work with the young guys.

That era of guys too, those were men. You go into a dressing room nowadays, it’s a lot different. I remember walking into my first real dressing room, and all I saw were some crusty fucking men. Right? Half of ‘em had guns and knives in their bags. Shit got handled back then, you know?

Now you walk in, there’s guys playing video games and fucking making sure they look pretty.”

“It’s evolution, I guess. I don’t know what it is, but I just prefer…when men were men.”

The Undertaker’s opinion – and that’s all it is, one man’s opinion – stirred the pot in the wrestling world and forced several current and former performers to respond.

Former WWE champions like Edge, John Cena, and current star Bobby Lashley, all spoke their peace about the “soft” and the issue seemed to have dissipated over the last few weeks until Matt Riddle decided to chime in.

Riddle, for those unaware, is a former UFC fighter most known for his time on Ultimate Fighter 7 on SpikeTV. Riddle was 8-3 in his MMA career before making the jump to the WWE.

Speaking with ViBe & Wrestling, Riddle commented on The Undertaker’s “soft” comment and held NOTHING back.

“I would say to the Undertaker and everybody else, times have changed, the human race and everyone is evolving. And yes we don’t carry knives and guns to work because we have metal detectors to keep us safe, so people don’t do that.

We have a wellness policy where we are all getting tested regularly so we are safe and in our right state of mind. I love my job. I am a former professional UFC fighter that broke people’s jaws on a steel cage.

[That’s] something that wasn’t around when he was a young man, and I bet if it was he still wouldn’t step up because it takes a different breed. He shouldn’t say certain things about the upcoming roster because we are real savages, not pretend ones. He should watch out.”

Whoa, did he just challenge The Undertaker to throw hands? I’m pretty sure he did. The current United States champion then stated he’s got nothing but respect for the former WWE star and tried to justify that – just like the wrestlers today – Taker is a product of his time.

“But I still respect him, I think [he] just a little over sold us, and I don’t think he wanted to be mean. I just think he thought his time was tougher and I would say this: when he worked times weren’t tougher.

They weren’t smart either. They were dumber. They abused certain things, they abused their bodies and they are all paying the price for it.

Today’s wrestlers are smarter, who work smarter. If they think they took more bumps, we don’t work the same schedule you were working and you can’t say we are softer for that.

We’re more smarter and educated like the modern day athlete and we are not getting hurt that much.”

Ok, fine, Riddle loses a couple of points for saying “more smarter” but he’s dead-on in his assessment.

“We’re training smart, we eat healthier and we do things better because people in the past made so many mistakes that we learned from them.

Now we don’t make those same mistakes anymore. So Undertaker saying we are soft, I don’t think we are soft.

I think we are more intelligent, so we don’t get hurt and don’t put ourselves in stupid situations like bringing guns to work. So Undertaker, nothing but respect but at the end of the day.

Respect and understand evolution. Realize we have evolved, we are better educated, and we don’t do certain things anymore. We do things right.”

Riddle makes more than a few valid points in his comments.

Wrestling is a completely different industry than the business The Undertaker cut his teeth in and dominated for decades but one point that needs to be made is that the business is better thanks in part to guys just like him.

The Undertaker’s always been portrayed as the default lockerroom leader and was even the judge in wrestler court for years. Thanks to guys like The Undertaker, wrestlers no longer needed to bring knives into locker rooms and worry about an unsafe work environment.