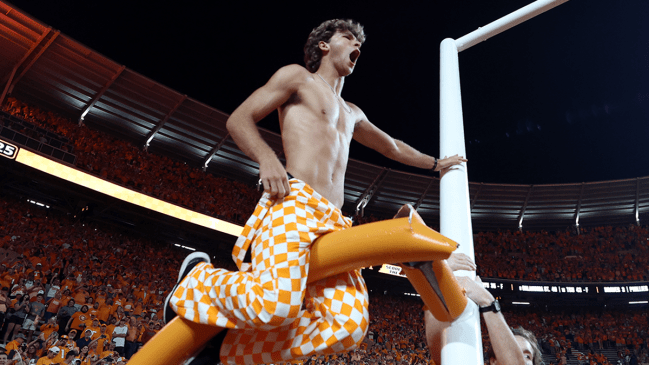 On Saturday, the University of Tennessee managed to pull off something it hadn’t achieved since Justin Timberlake’s “SexyBack” sat atop the Billboard Hot 100 and The Prestige was going head-to-head with The Departed at the box office: beat Alabama at football.

It took more than 15 years, but the Vols were finally able to snap a losing streak of as many games when they upset the Crimson Tide at home in a 52-49 victory (which was also the Vols’ first over Bama since the start of the Nick Saban Era) that gave the tens of thousands of fans who sparked celebratory cigars in Knoxville a reason to rage.

That includes the many people who had a hand in dismantling the goalposts inside Neyland Stadium before taking them on a tour that ended with the uprights getting chucked into the Tennessee River.

The goal post has been thrown in the river pic.twitter.com/uOcTM7kDOT

On Sunday, the school was unable to resist the urge to commit a major unforced error by trying to use the watery fate the goalposts met (as well as the (as well as the $100,00 fine it received from the SEC for allowing spectators to storm the field) to get fans to fork over a collective $150,000 by launching what was seemingly intended to be a lighthearted fundraising effort that landed with a resounding thud.

Y'all remember how we tore the goalposts down, hauled em out of Neyland and dumped em in the Tennessee River?

Yeah that was awesome.

Anywho, turns out that in order to play next week's game, we need goalposts on our field. Could y'all help us out? 🙏 https://t.co/NSMoL3SzPX

It’s bad enough that the school would actually have to pay around 25% (at most) of its stated goal to replace the goalposts. However, the fact that we were also treated to a video where university president Randy Boyd made it very clear he could not care less about the cost while watching them come down from a luxury box cemented the move as a “Bad Look.”

As of this writing, the Vols had already managed to generate close to $80,000 in donations in spite of the backlash to their off-brand GoFundMe. There’s no telling what they’ll ultimately do with those funds, but if the program is hoping to save some face, it’s got a golden opportunity to spin the stunt and make the world a slightly better place in the process.

In recent years, we’ve been treated to a pretty cool trend originally championed by members of Bills Mafia that has seen football fans put aside their differences and raise millions of dollars for various charities and foundations affiliated with players who’ve used their platform to support some great causes.

As plenty of people have pointed out, $150,000 is basically a drop in the bucket for a learning institution with a $1.34 billion endowment and an athletic department that generated $150 million in revenue last year.

As a result, you have to imagine that money would make a bit more of a difference if it was donated to, say, a medical institution with a focus on cardiovascular care and treatment including emergency surgeries and transplants—which just so happens to be the specialty of the “Heart Hospital” that makes up part of the University of Tennessee Medical Center.

What a coincidence! I guess we’ll just have to wait and see if the school opts to take advantage of the easiest PR win imaginable.