Urban Meyer Speaks Out For First Time Since Getting Fired And Denies Everything, But Apologizes 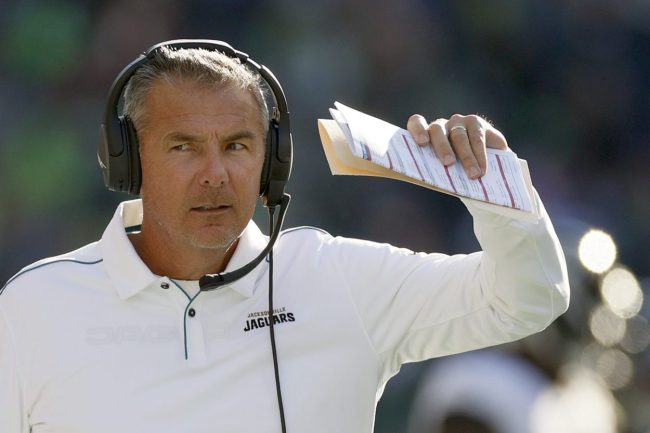 Urban Meyer’s first season as the head coach of the Jaguars came to a screeching halt earlier this week. After multiple accusations came out against him that did not paint him in a positive light, Meyer was fired.

He recently spoke out for the first time since getting let go and denied everything. His vehement denial comes after Jacksonville announced that it will be firing him for cause, which means that much, if not all, of his remaining contract is void.

By denying that the incidents alleged against him did not occur, it sets Meyer up for a legal discourse in which he could fight for his contract to be paid out, if he so chooses. He could also be delusional and actually feels that he was blindsided by the allegations, which have been corroborated by multiple sources and players as having occurred.

Here is what Meyer had to say in an exclusive interview with NFL Insider Ian Rapoport:

Exclusive: Former #Jaguars coach Urban Meyer speaks for the first time since getting fired, describing his dismissal to me as “devastating” and “heart-breaking.”

More from our 20+ minute conversation: https://t.co/DNrxliZCip

Meyer began with an apology.

“I just apologize to Jacksonville,” Meyer said. “I love Jacksonville. It’s one of the reasons I took the job. I still think Shad’s a great owner. It’s heart-breaking. I just had a dream of it becoming a destination place with a new facility he agreed to build and some day to walk into that stadium where it’s standing room only. Because I know how bad the people of Jacksonville want it. So, I’m just heartbroken that we weren’t able to do that. I still believe it’s going to be done. It’s too good of a place.”

And then he started to deny everything. According to Rapoport, Meyer said he was “devastated” and “denied all accusations made against him in his final days.

“It was like, ‘Wait a minute, where is this coming from?’ ” Meyer said in the interview. “I’ve certainly made a few mistakes but those weren’t right.”

Regarding the Robinson situation, Meyer said that it was a miscommunication.

“We discussed it as a staff,” Meyer said. ” ‘When you see someone lose the ball or even see them be loose with the ball, get them out of the game, get their mind right and then get them back in.’ When he fumbled, I said, ‘Take him out.’ We took him out and then we had lack of communication about when to put him back in.”

That certainly could be true, because Meyer has made it clear that he did not have control of who was on the field when.

In regard to the handshake that went viral after Meyer’s final game with Jacksonville, a 20-0 loss, he says that it had nothing to do with Titans head coach Mike Vrabel.

“Someone asked me about Vrabel’s [handshake], we’re really close,” Meyer said. “That had nothing to do with him. That’s probably one of my issues why I’ve thought some of the things I said: I can’t take losing. I try to accept it, it just eats away at my soul. And I believe our players deserve better.”

Whether Meyer is lying or not, we may not know for awhile. It certainly seems like multiple sources have confirmed a lot of the reporting out of the Jaguars locker room, but Meyer is holding out.

Assuming that he will go to court over his contract, the truth is bound to come out.