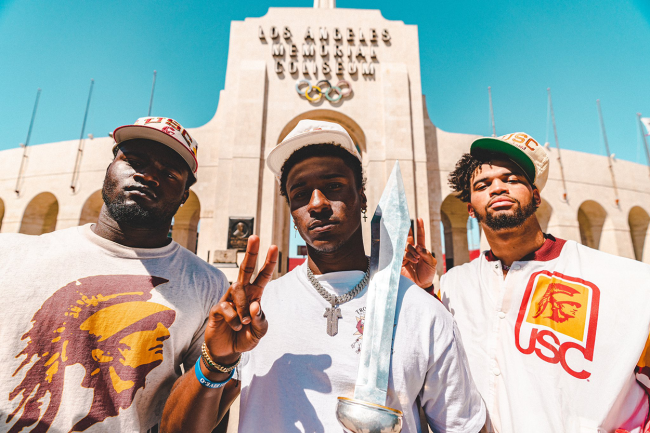 As USC football begins its new era under head coach Lincoln Riley, the Trojans are primarily focused on winning football games. However, while the emphasis on success comes mostly on the field, college football is bigger than just wins and losses.

Image, especially in the current age of social media, is crucial.

USC, which has long been considered one of the most historic programs in the nation, comes with a big spotlight. The Trojans, in a lot of ways, are Los Angeles’ football team and there is constant eyes on the program.

In turn, making USC cool is easy, but its brand has taken a hit with the on-field struggles in recent years. Now it’s time to rebuild that brand and the Trojans know it.

To help bring back the “cool factor,” USC football is cranking out some top-tier media.

When recruits get on campus, the Trojans are hooking them up with some epic old-school visit videos with major Cali vibes. Last week, the Trojans dropped a baller championship-focused video that tied in Los Angeles and the history of success, but there was one major snub.

Over the weekend, USC dropped a video that focused strictly on its (correct) claim of being ‘The Mecca of Media Market Branding.’ It’s super cool.

It leans all the way into the Southern California drip and brings back some major old school vibes while showing off the new-school era of drip. All of the fire vintage clothing comes from @USC_Vintage on Instagram.

The message that the Trojans are sending is very bold and clear but it is exactly what they should be selling. If you want to play college football and enter into the media space, there is no better place to do it than Los Angeles and no school better equipped than USC.