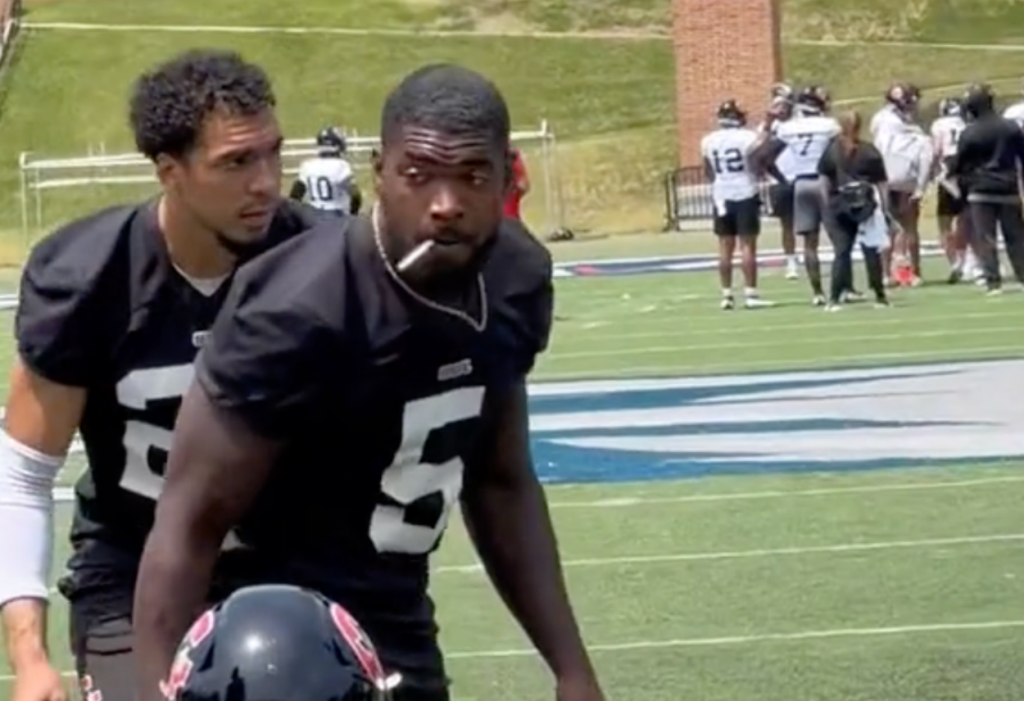 Update: Reggie and the team released a new video explaining what happened and you can find at the bottom of this article

The USFL is proving itself to be pretty good at making headlines. They were the talk of the town after a player allegedly got cut from his team for ordering a pizza instead of a salad.

And now this, USFL player Reggie Northrup practicing for the Houston Gamblers with what appears to be a cigarette in his mouth. Do I actually think this is a real cig? Definitely not. If this was 20+ years ago, maybe, but athletes are well-oiled machines and burning cigs doesn’t mesh well with that.

Is This USFL Player Practicing With A Cigarette In His Mouth?

Interestingly, the video was uploaded to the Houston Gamblers’ official TikTok which all but confirms it’s a prop cigarette or a vape made to look like a cig. It would be in line with the ‘riverboat gambler’ aura though so who knows what’s going on here other than football fans on social media are baffled by the video:

Is he #smoking at practice!? 🤣😭 #football #usfl #houston

I’m inclined to think that it’s one of those one-hit ‘bats’ that you stuff with a little nug that is designed to look like a cigarette, or I think it’s a vaporizer. Even practicing with an un-lit cigarette in one’s mouth would be nasty.

Over on TikTok, the official USFL account commented “we’re launching an investigation” which 100% confirms (in my opinion) that this is just a viral stunt. Obviously, it worked because the comments are hilarious.

One person wrote “y’all ain’t called the gamblers for nothin'” which honestly must’ve been a pain in the butt to type with all of that autocorrecting trying to happen. Another person wrote “this is just the fun version of the NFL” and another chimed in with “bruh they let someone smoke at practice but not eat pizza.” One person added “bro plays for Bishop Sycamore” which is a name I haven’t heard in months.

This the same league that cut a dude for ordering pizza ?

May I present Kansas City Chiefs' QB Len Dawson during the halftime of Super Bowl I. A dart and a Fresca. pic.twitter.com/V7z54kwCOK

I’m certain the USFL will drop a video in the next few hours explaining that it was all a viral stunt but that doesn’t change how baffled football fans were. It picked up over a million views in 16 hours on Tiktok alone.

Who is the USFL Player in the Houston Gamblers Video?

The player with the cigarette (real or not) in his mouth is Reggie Northrup who is a recent 6’1″, 220 lbs linebacker from the Florida State Seminoles. Now I KNOW he wasn’t allowed to smoke in Tally because I’m a Seminole myself and that just wouldn’t fly in town.

Reply to @usfl We have solved the mystery of the FAKE cigarette 😂 Reggie Northrup has that attitude. #USFL #Gamblers #football