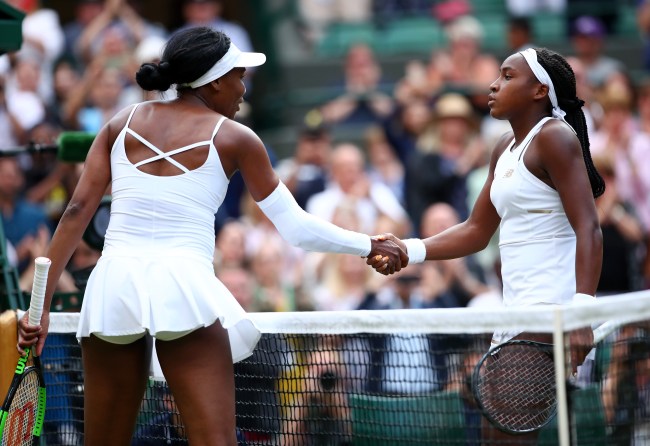 Venus Williams may be contractually obligated to retire after what happened at Wimbledon today.

The five-time Wimbledon champion was beaten by a 15-year-old American named Cori Gauff, who was making her Wimbledon debut. Gauff beat the 39-year-old Williams in straight sets en route to becoming the  youngest tennis player to appear in the tournament in the Open era. For a bit more perspective on the monumental victory, by the time Gauff was born in 2004, Williams had already won four majors.

15-year-old Cori Gauff (@CocoGauff) became the youngest player since 1991 to win in the first round of the ladies' singles after beating Venus Williams 6-4, 6-4. #Wimbledon. https://t.co/ZDmQEVhBaY

Gauff grew up admiring the Williams sisters, told reporters that during her meeting at the net with Venus after the match, she told her idol:

“I told her thank you for everything that you did. I wouldn’t be here without you. I always wanted to tell her that.”

Gauff is the 12th youngest overall to play in the Wimbledon main draw, but the youngest to come through qualifying, according to CNN. She was the youngest United States Open junior finalist in history in 2017 and won the French Open junior title in 2018 at 14, becoming the second youngest girls champion after Martina Hingis.

“I want to be the greatest of all time,” Gauff told ESPN at age 12.

Cori Gauff, have a day kid!