Tanking Season Has Officially Begun After Seeing The Performance Of Projected No. 1 Overall Pick Victor Wembanyama 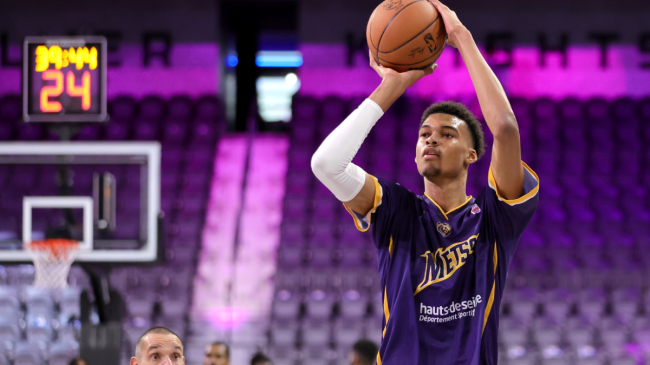 Victor Wembanyama is the unanimous choice to go No. 1 overall in a loaded 2023 draft class. The big man boasts a lanky 7-foot-4 frame and the unique ability to defend, shoot the three, and handle the point.

He’s the perfect blend of talent and has a ceiling as high as any prospect we’ve seen in recent years.

Wembanyama showed that skill on the court Tuesday night as he made his US debut. The French basketballer plays center for the Boulogne Metropolitans, a team that competed against the NBA G-League Ignite this week.

And he made his presence known right from the opening tip.

Wembanyama opened the game with a quick denial, one of his five blocks on the evening. He then ran the point before blasting by a defender and converting a layup.

Webanyama sequence to start this game against the G-League Ignite. goodness me. pic.twitter.com/MzMNLSXzl1

The big man finished with a final stat line of 37 points on 55% shooting (7-11 on 3-PTs), four boards, and five blocks, taking the NBA world by storm.

Wembanyama’s official introduction to fans in the United States had everyone talking on social media. And most wouldn’t blame an NBA team from tanking to land the center’s talents.

After seeing Wembanyama go off in his US debut, many hopped on social media to post reactions. It doesn’t look like anyone would blame a franchise for tanking after seeing his historic performance.

His five-block, seven-three-point showing is something that’s been done just once in NBA history. He could change that in 2023. Check out some of the response on Twitter below.

NBA contributor Kevin O’Connor simply said, “Victor Wembanyama is an alien,” after seeing the show while others noted that the big man looked un-guardable.

Victor Wembanyama is an alien pic.twitter.com/nahSxZIE0L

How many teams will be tanking to land the generational player in the upcoming draft?

Adam Silver: “I don’t want anybody tanking for Victor Wembanyama!”

so who is gonna tank for Victor Wembanyama? 🤣🤣🤣

Listen if the Heat want to tank for Wembanyama, I would understand.

Seeing Victor Wembanyama, the 7-foot-4 star from France, up close in Las Vegas for the first time and it all makes sense. Moves like a guard, man. Shooting stroke is butter. Ain't no way this young man is that fluid at that size. Tell your favorite team to tank. Trade everybody.

If not tanking, maybe a potential trade. Ryen Russillo asks, “How long is the list of players you WOULDN’T trade for Wembanyama?”

How long is the list of players you WOULDN’T trade for Wembanyama?

The race to land Wembanyama will soon be on. Whoever is able to nab the unbelievable talent could see dividends being paid almost immediately.