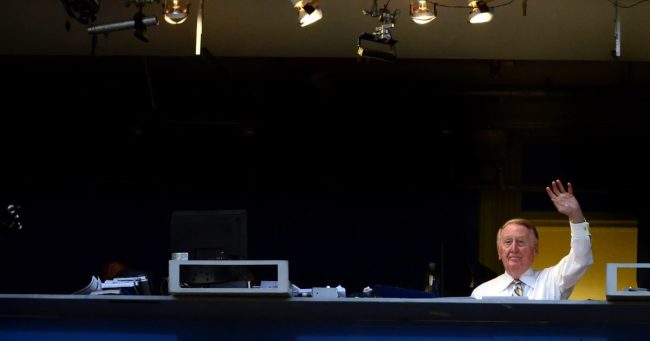 Vin Scully is arguably the greatest sports broadcaster of all time. The Hall of Fame announcer was the sound of summertime for Dodgers’ fans between 1950 to 2016.

The play-by-play man had an uncanny ability to not only call the game action, but to inform and entertain listeners of players and moments in between pitches.

On Tuesday, Scully passed away. As many mourn the death of someone the Dodgers’ president and CEO calls, “an icon,” fans and media are beginning to post their favorite memories as told by the broadcaster.

And there are many.

Scully was behind the mic for some of baseball’s all-time greatest moments. His career with the Dodgers began in Brooklyn with the likes of Jackie Robinson and Pee Wee Reese. It spanned more than 65 seasons as he saw the team through a move to the West Coast, seven World Series titles, and four stadium changes.

He retired six years ago at the age of 88, ending a storied career. Now, with his passing, we recount some of his most iconic calls.

There is a plethora of moments to choose from, but fans have zeroed in on their top calls as told by Vin Scully. Take a look at the immediate social media reaction.

Maybe his top call was of Kirk Gibson’s series clinching home run in Game 7 of the 1988 World Series.

You can’t tell the story of baseball without Vin Scully pic.twitter.com/PBq5el6vwB

A hobbled Gibson takes a pitch from Dennis Eckersley deep to right field to give the Dodgers a win. Scully’s famous line lives on in baseball history.

“In a year that has been improbable, the impossible has happened!”

Scully was on hand to call Hank Aaron’s record-breaking 715th shot, as he became baseball’s all-time home run leader against the Dodgers in 1974.

It was only right that Vin Scully was on the call when Hank Aaron broke the all-time home run record pic.twitter.com/PeG4CsNv6m

As Aaron is mobbed at home plate by this teammates and family, Scully is on the call.

A part of baseball died today.

“If you have a sombrero, throw it to the sky!”

Scully was on hand to call Sandy Koufax’s first perfect game, and his fourth no-hitter. Below is the full call from the game’s final frame.

“And a crowd of 29,139 just sitting in to see the only pitcher in baseball history to hurl four no-hit, no-run games… On his fourth no-hitter he made it a perfect game… He struck out the last six consecutive batters. So, when he wrote his name in capital letters in the record books, that “K” stands out even more than the O-U-F-A-X.”

Of course, not all of Vin Scully’s top calls came in Dodger games

Scully was on hand for other legendary moments, including the famous Bill Buckner error in the 1986 World Series.

My favorite call in baseball history came from Vin Scully:

“BEHIND THE BAG!!! IT GETS THROUGH BUCKNER!!! HERE COMES KNIGHT AND THE METS WIN IT!!!”

He also called the iconic catch between Dwight Clark and Joe Montana in the 1981 NFC Championship.

Another indelible call from Vin Scully, etched in history forever.

And how about his call of Joe Carter’s walk-off home run in the 1993 World Series?

Maybe most importantly, Scully was a calming voice in times of tragedy

Scully provided listeners with uplifting words in moments of grief. He spoke on the attacks of 9/11 and the passing of Kobe Bryant.

Rest In Peace, Vin. You will be missed ♥️ pic.twitter.com/SpGeWShLlK