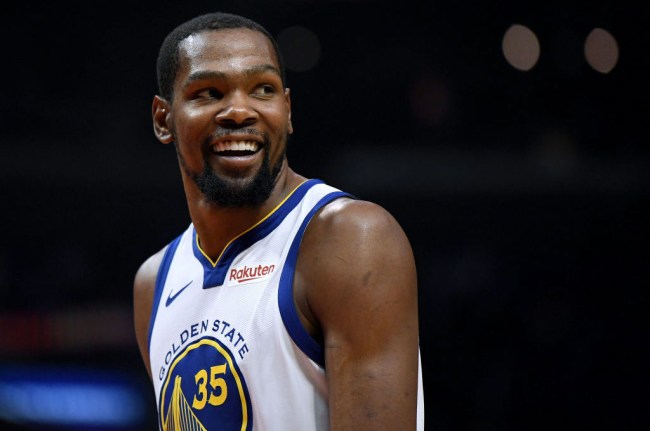 Last week, Kevin Durant shocked approximately no one when he declined his player option and became a free agent, and after months of speculation and rumors concerning his next move, he eventually announced he’d be taking his talents to Brooklyn to play alongside Kyrie Irving.

Durant took a pay cut to play for the Nets, which seemed like a fairly odd move when you consider he’d previously made it very clear his primary goal heading into the offseason was to make as much money as possible.

On Monday, we got some more insight into what guided KD’s decision as it was reported he was tired of playing second fiddle to Steph Curry and wasn’t a fan of the constant drama he had to deal with while playing for the franchise.

However, it doesn’t appear Golden State has any hard feelings based on a statement that was released by Warriors CEO Joe Lacob, who lavished praise on Durant while thanking him for his efforts before closing by curiously asserting “no player will ever wear #35” as long as he is the co-chairman of the team.

Look—there’s no doubting Durant played an instrumental role in helping the Warriors bring home a couple of championships, especially when you consider he was named the NBA Finals MVP both times they won.

With that said, are we really going to reward a guy for shamelessly chasing a title by becoming part of a superteam before peacing out after three years by retiring his number? After all, LeBron won two titles during his four-year stint in Miami and you don’t see his jersey hanging in the rafters.

Is Lacob really overcompensating because he feels the Warriors are responsible for Durant’s injury? Some people seem to think so.

I see they cut out the "we did it so he wouldn't sue us for negligence" part of the statement from the final draft https://t.co/xzxXB1Act0

Please don't hate us for popping your Achilles, my dude! https://t.co/9thhQyQlVM

Out of curiosity, I did a little bit of digging to see if there’s any precedent for this decision and it doesn’t really appear there is.

I stumbled across this thread that noted Pat Riley had the Heat retire Michael Jordan’s number as a sign of respect and that Cavaliers “legend” Nate Thurmond received the honor after two seasons with the team but that’s really the only comparable example I could find.

I think we can all agree that the Warriors need to follow the sage advice of Paul Rudd in Forgetting Sarah Marshall and do less.