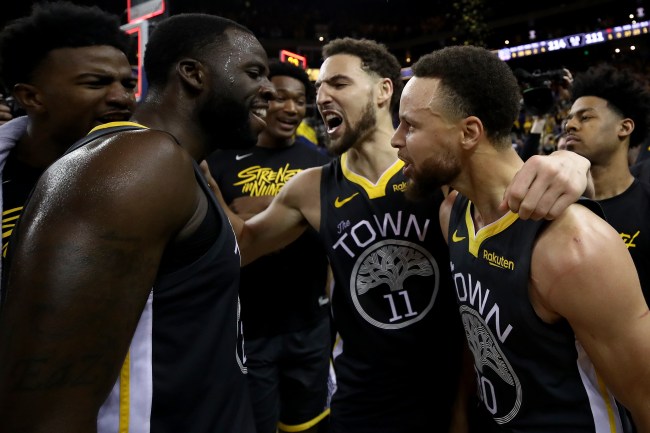 After a down year because of unfortunate injuries, the Golden State Warriors are expected to reload and make a run at another championship this upcoming NBA season. Remember, the Dubs aren’t that far removed from reaching five-straight NBA Finals’ (winning three), and still have the core of Stephen Curry, Klay Thompson and Draymond Green to build around — even if those guys are a little bit older than the last time we saw them on the floor together in the June of 2019.

While no team likes to suffer some of the misfortune that the Warriors did last NBA season — but, really, given the pandemic and unorthodox situation, maybe Golden State was lucky not to participate in the whole bubble experiment — one thing did come from the team’s crappy record: It landed the No. 2 overall pick in this year’s NBA Draft. Although there isn’t clear-cut, top tier talent like we saw last season with Zion Williamson, Ja Morant and R.J. Barrett, having a top-2 pick in the draft is a serious asset; especially for a team in win-now mode and has some pieces to retool its roster.

That’s why we’ve all heard so many Warriors trade rumors over the past few months, with people wondering what in the hell the team will do with that intriguing draft position. With a former No. 1 overall pick in Andrew Wiggins more than available, there’s a lot of speculation the Dubs will package him with that No. 2 pick this year to try and land another All-Star — and Paul Pierce is the latest analyst to suggest it during ESPN’s The Jump this week.

Most fans think of names like Bradley Beal or even two-time reigning MVP Giannis Antetokounmpo as a trade target, but Pierce’s prediction is a little bit off the beaten path. Instead of a wing to replace a guy like Kevin Durant — who joined the Brooklyn Nets in the summer of 2019 — Pierce sees an All-Star big man as the right piece to join the Warriors, suggesting the team go get Nikola Vucevic from the Orlando Magic.

“I think its all going to predicate on what they do with this draft pick,” Pierce said on The Jump, when asked if he expects Golden State to return to dominance in 2020-21. “If they could turn this draft pick in say, a trade with (Andrew) Wiggins to acquire another All-Star, or All-Star caliber player, than yes, they can get back into contention. And the name that comes to mind… if they can trade the No. 2 pick and Wiggins and possibly get a guy like (Orlando Magic center Nikola) Vucevic, who I think could go in there and fit right in among their guards.

“He gives them a down-low presence, he can knock down shots,” Pierce continued. “That’s a guy that I can say, he’d fit right in with Golden State.”

Given the ages of their superstars, the Warriors probably have a championship window of about 3-5 years (assuming everyone stays healthy and don’t get sick of one another), so adding somebody like the 30-year-old Vucevic is definitely a win-now move that probably won’t extend those titles aspirations. But that’s what Golden State’s currently in anyways, so maybe Pierce is on to something here.

A one-time All-Star, Vucevic averaged career highs in all three major categories — 20.8 points per game, 12.0 rebounds per game and 3.8 assists per game. Plus, he’d present a unique wrinkle to the Dubs’ offense given his ability to play both down low and on the perimeter — meaning Golden State’s offense and defense could be even more lethal than we remember.

As the NBA Draft approaches on November 18, all eyes are on the Dubs and what they’ll do with that No. 2 pick of theirs. Hold onto it, and they have a team that can compete, but probably not win a title. Package it with somebody like Wiggins to get another All-Star and, look out, these could be an even more improved version of the Warriors who won three titles in five years. That should terrify the entire league.