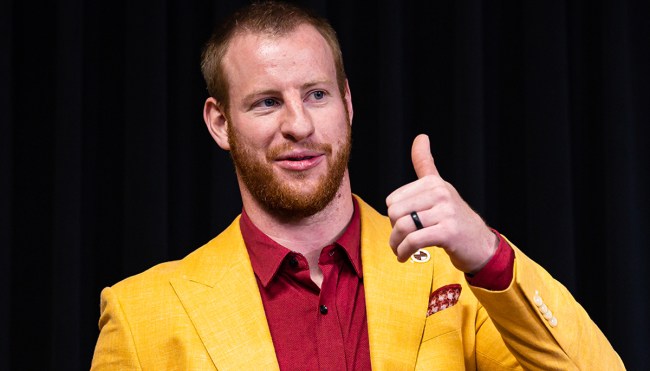 It’s been a little over a month since the Indianapolis Colts pulled off a borderline miracle by not only convincing the Washington Commanders to take Carson Wentz off their hands in exchange for a couple of picks but convincing the team to cover the entirety of the $28 million the quarterback owed next season.

Now, you have to assume the Commanders pulled the trigger on the trade because they were under the impression Wentz has the potential to help a franchise that hasn’t posted a winning record since 2016 turn things around. When you consider Washington’s odds of winning a Super Bowl immediately fell in the wake of the trade, it’s hard to imagine that will be the case, but only time will tell.

It’s clear the Colts weren’t exactly heartbroken to see Wentz go based on details that have surfaced since he was dealt, but based on a new piece of information that’s surfaced, you have to imagine the team was truly elated by the terms it was somehow able to convince the Commanders to agree to.

Last week, The Athletic published an in-depth article filled with anonymous quotes from NFL executives who were asked to share their thoughts on how free agency has gone for every team so far.

If you were already puzzled by the Wentz trade, you’ll be scratching your head even harder after reading the section dedicated to it, as one unnamed source said the Commanders were the only NFL team interested in the quarterback and another added a bit of perspective to the situation by saying:

“If you polled the entire league and said you can have Taylor Heinicke for $2 million and you have $26 million to spend plus two third-round picks, or you can have Carson Wentz, I’m pretty sure the majority would prefer Heinicke. I’d rather have Baker Mayfield and $8 million.”

As another exec noted, “If it works, you don’t care what you paid.” However, when you consider the Commanders have already run into issues when it comes to signing other players thanks to Wentz’s contract, he’s going to have to put in some serious work this season.