Major League Baseball has found itself at the center of a number of scandals over the course of its 144-year existence courtesy of the likes of the Chicago Black Sox, Pete Rose, and the number of players who pumped their body full of steroids over the course of a couple of decades until the league was forced to acknowledge it had a problem.

Last year, the MLB hit another road bump courtesy of the Houston Astros, who were accused of cheating their asses off by stealing signs on their way to winning the first World Series in the history of the franchise back in 2017.

After conducting an investigation, commissioner Rob Manfred doled out some incredibly underwhelming punishments and virtually every member of that year’s roster escaped virtually unscathed, as the Astros were allowed to retain their title and the players weren’t asked to hand in their championship rings.

As a result, people around the baseball world are now forced to figure out how to get some revenge on the Astros—however petty it may be—so we did some thinking to come up with a few ways to troll the team this year to make ourselves feel a little bit better about this miscarriage of justice. 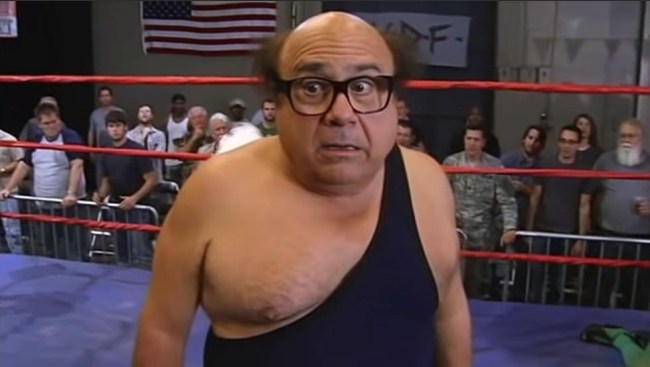 Last week, a Yankees fan ushered in what will undoubtedly be a season of endless antagonizing when he showed up to an Astros batting practice and proceeded to pound on a trash can just like the team’s employees did when they were shamelessly flouting the rules.

I did a fair amount of brainstorming when trying to come up with some receptacle-related shenanigans people can engage in, and after taking all of the options into consideration, nothing amused me more than a plan that involves Danny DeVito donning a black unitard and heading to a Phillies game to throw out the first pitch as The Trashman.

There are few people who have mastered the art of saying the word “trash” like DeVito has during the countless times it’s come out of the mouth of Frank Reynolds on It’s Always Sunny in Philadelphia.

During season five’s “The Gang Wrestles for the Troops,” Frank appropriately adopted the alter-ego of “The Trashman,” a pint-sized version of Big Show who litters the ring with trash before eating some of it and eventually smashing his opponent over the head with the large metal cylinder he used to transport the garbage into the squared circle.

Unfortunately, the Phillies will only be playing the Astros this season during a three-game series in Houston in July, but if Gritty can get in on the action despite being a mascot for a hockey team, I see no reason why Philadelphia can’t do the same. 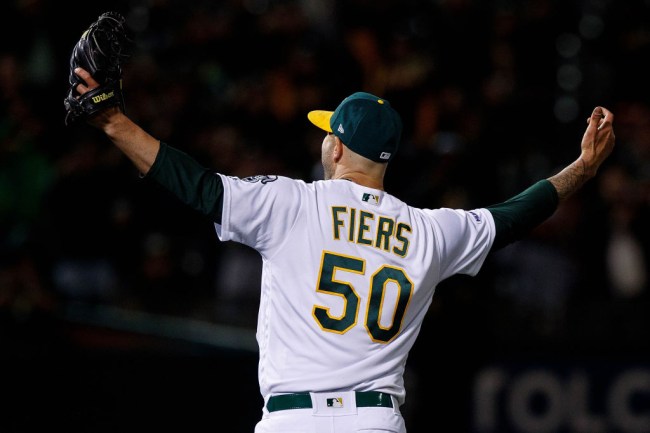 Pitcher Mike Fiers became the Edward Snowden of the Astros saga when he approached The Athletic last year to blow up the spot of his former team and detailed the tactics they use to win the World Series during his last year in Houston before signing a contract with the Tigers.

The current Athletic has come under fire from a number of people who probably still have a “Stop Snitchin'” shirt they bought in 2004 in their dresser—including ESPN‘s Jessica Mendoza, who criticized him for going public (interestingly enough, Mendoza was an advisor to the Mets at the time but ultimately stepped down a few weeks after the team parted ways with Carlos Beltran when he was implicated in the scandal).

However, most people around the league seem to be grateful Fiers came forward, and if you’re as pissed at the Astros as the majority of baseball players are, the least you can do is thank him for blowing the whistle by buying some of his merch.

In addition to providing Fiers with some royalty money, rocking his jersey (or even a shirsey) at a game when the Astros come to town (or, if you’re brave enough, in Houston) is a solid gesture and a nice, subtle way to throw some shade at the team.

Bully Minute Maid Into Dropping Their Sponsorship By Threatening A Boycott

The last thing I want to do is get into a debate about the current state of political correctness, but regardless of whether or not people these days are actually too eager to “cancel” someone or label things “problematic,” one thing is very clear: brands are fucking terrified of associating themselves with the wrong people.

The internet has made it easier than ever to interact with people around the world, and as a result, it’s never been easier to mobilize a group of like-minded individuals to rally around a common cause in an attempt to make so much noise that your opinion can no longer be ignored.

Nowadays, it seems like if you can get enough people to tweet out #Boycott[Whatever], you stand a pretty good chance of actually making an impact once you reach the tipping point where the poor social media manager who just wanted to get paid to make memes and joke with the Wendy’s account gets so overwhelmed that they have no choice but to contact their boss.

That’s why, ladies and gentlemen, I proposed we #BoycottMinuteMaid.

Look. I like Minute Maid. I really do. However, most of the orange juice I consume on a yearly basis is diluted with either champagne or malt liquor and I highly doubt I’d be able to detect a noticeable difference if I filled a Colt 45 with Tropicana or Florida’s Natural instead.

Oddly enough, this would not be the first time the Astros had to change the name of their stadium because of some morally-bankrupt assholes, as the ballpark was previously Enron Field before Ken Lay and the gang found themselves in the crosshairs of the SEC.

Will history repeat itself? We might as well try and find out. 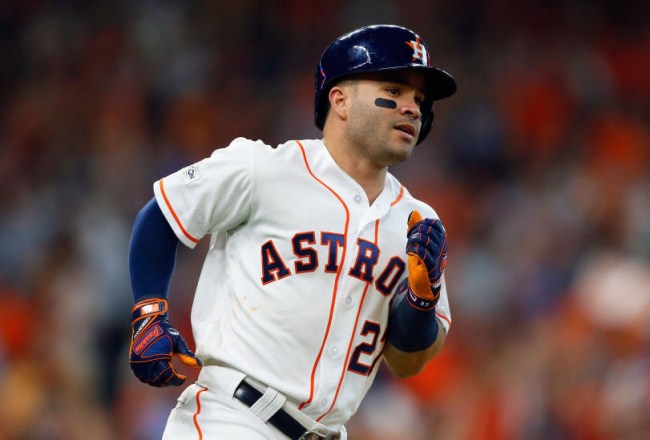 2017 was a great year for José Altuve. In addition to winning a World Series, his performance during the regular season was deemed outstanding enough to make him considered the Most Valuable Player in the American League.

Of course, as we all know by now, the second baseman had a little bit of help from his friends who let him know what type of pitch to expect during home games, which is kind of like an investment banker getting an Employee of the Year award because he got away with insider trading.

Now, it’s currently unclear exactly how Astros batters were actually informed about the stolen signs in question. As I alluded to above, the most popular theory is that once the catcher’s signal was relayed to the clubhouse, employees would bang on a trash can with the corresponding pattern and there seems to be video evidence to support this claim.

However, after the scandal began to unfold, there were rumblings from around the league that the Astros had gone as far as hiding electronic buzzers under jerseys to gain a competitive advantage all the way into the 2019 season.

These rumors were fueled by a video of Altuve telling his teammates not to rip his jersey off after he hit a walk-off home run during last year’s ALCS, which some people believed he did in order to ensure the supposed buzzer wasn’t exposed.

The MVP* denied this was the case and a teammate eventually claimed he was actually trying to hide an ugly tattoo that he was apparently so embarrassed by that he didn’t want the rest of the world to see it, and last week, way too many people watched him undress in the locker room at spring training before confirming that tattoo is real (although it’s still unclear how shitty it is).

At this point, we know the Astros cheated even after they emphatically denied it, and as a result, I think they no longer deserve the benefit of the doubt. Consequently, I suggest we go all-in on the buzzer conspiracy theory and I implore every person tasked with picking the music batters walk up to the plate to this year to play “Flight of the Bumblebee” whenever Altuve strides toward the box.

In my experience, there aren’t many opportunities in life where you have the chance to troll someone with the works of Nikolai Rimsky-Korsakov so I suggest we seize this one while we can.

Steal Any Sign An Astros Fan Bring To A Game 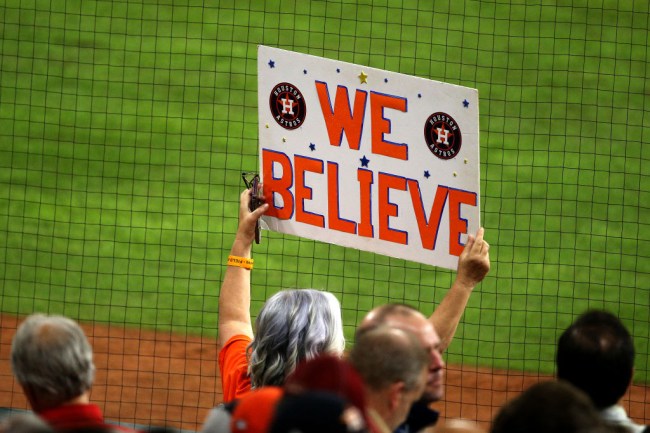 This one is pretty straightforward. The Astros won the World Series because they stole signs. Say what you will about the merits of Hammurabi’s code but I would argue that instituting some “eye for an eye punishment” here wouldn’t be the worst thing in the world.

If you’re a baseball fan, you live to see your team win a World Series. If you’ve been lucky enough to know what that’s like, then I don’t have to tell you just how exhilarating it is to clinch a championship and take part in the festivities that follow, whether that involves housing a bottle of champagne by yourself or standing shoulder to shoulder with tens of thousands of other fans who gathered together for the victory parade.

Astros fans got to experience all of that back in 2017, and in the process, theoretically deprived supporters of every other team in the league of having the chance to do the same thing.

Do you know the last time the Dodgers won the World Series? 1988! There are people who have rooted for them for over 30 years who still haven’t gotten to taste the thrill of victory because the Astros decided to piss in their mouth instead.

As far as I can tell, there are only two reasons to bring a sign to a baseball game: to get a ball or appear on some sort of screen, whether we’re talking about the Jumbotron or a television broadcast. Achieving either of those goals is a rush—a rush similar to the one Houston fans experienced in 2017 when their team won* the title.

I’m obviously not suggesting that you should track down a kid in an Astros jersey standing next to the bullpen with a poster board emblazoned with a poorly scrawled message asking for a ball and rip it in half as their tiny little heart does the same thing.

If they ask their parent to hold it for them, though? Then it’s definitely fair game.

Relax! I’m kidding. I hate that I even have to clarify that, but based on the messages I’ve received from some of the most brilliant minds the internet has to offer over the years, I want to stress that you should not make a small child cry because you’re mad at the team they like for winning a World Series they might not even remember watching.

This is not ‘Nam. This is baseball. There are rules, and if this particular form of justice seems appealing to you, then just follow one simple guideline: if someone looks like they’re too old to bring a glove to a game, they are also too old to have a sign.

Over the weekend, security guards literally stole signs from fans who were heckling the Astros so I declare open season on this practice.