J.J. Watt Could Reportedly Return To The Texans In Time For The Playoffs After Suffering What Appeared To Be A Season-Ending Injury 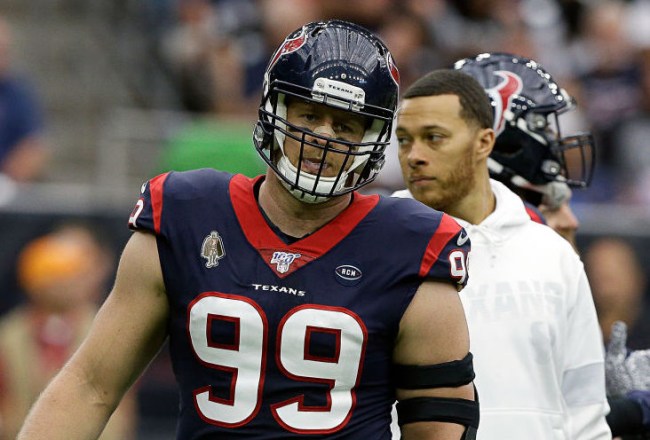 On Sunday, the Texans managed to rack up their eighth win of the season after topping the Patriots by a score of 28-22 and secured a spot at the top of the NFC South as they continue on their quest to make the playoffs for the fourth time in five years.

However, Houston has had to go without the services of J.J. Watt for the past month after the defensive end suffered yet another in a long line of injuries when he tore his pectoral muscle during a game against the Raiders at the end of October.

It was initially unclear how serious the injury was, but after undergoing an MRI, Watt served as the bearer of bad news when he informed fans he was slated to miss the rest of the season due to the tear.

This game can be beautiful and it can also be brutal. Absolutely gutted that I won’t be able to finish the season with my guys and give the fans what they deserve. I truly love this game and can’t stand letting you guys down. Thank you for all of the thoughts & well-wishes.

While this was obviously a major setback for the Texans, they’ve nonetheless managed to win three of the four games they’ve played since losing Watt. However, there’s no doubt they’d love to have him back in action, and if Ian Rapoport is to be believed, their wish could be granted earlier than expected.

According to the insider, the Texans are holding out hope that Watt could return in time for the playoffs (assuming they don’t implode in the coming weeks) and are keeping an injured reserve spot open for him as they keep an eager eye on his recovery.

Watt will reportedly undergo another MRI this month to assess his readiness, but according to those in the know, he already feels like he could make a return.

Given his history, it might be wiser for Watt to ensure he’s 100% healed instead of risking yet another setback, but given his notoriously competitive nature, I wouldn’t be shocked to see him on the field before the Texans’ season comes to a close.