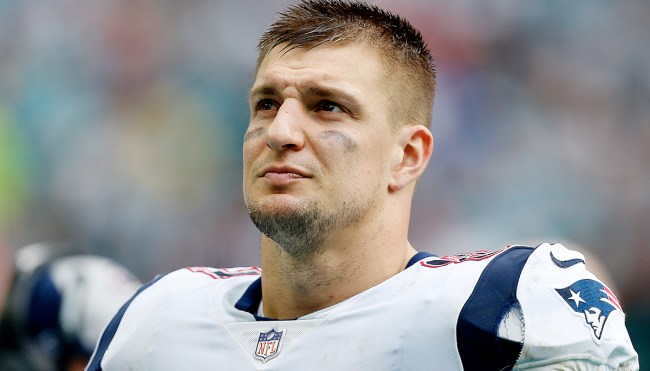 It was virtually impossible for any serious Patriots fan to be mad at Tom Brady for deciding to take his talents to Tampa Bay in 2020 based on everything he managed to do for the franchise during his 20 years in New England.

However, the legendary quarterback still managed to rile plenty of people up when he neglected to mention the Patriots (or Bill Belichick) when he announced his short-lived retirement on Instagram earlier this year. One insider claims the omission had something to do with his ultimately ill-fated plan to play for the Dolphins next season, although that explanation seems like a bit of a stretch).

Last month, Rob Gronkowski found himself in a similar situation when he announced his decision to officially hang up his cleats after 11 seasons in the NFL. The post—which featured the tight end in a Tampa Bay uniform—was also suspiciously absent of any reference to the team he spent the majority of his career with, which naturally led to many people reading way too far into the omission.

Now, Gronk—who recently confirmed he won’t heed Brady’s call if asked to come out of retirement for a second time—has addressed the perceived snub. During a conversation with NESN, the beloved big man reaffirmed his love for Pats fans while suggesting the backlash was overblown, saying:

“I think it’s a little blown out of proportion. I mean, I kind of did it when, you know, my first retirement.

“There’s no doubt I love New England. I love all the fans here in New England. There’s no doubt. But I felt like that speech or whatever, the time and place I did for the first one was great, and I was just kind of giving it for that retirement for the two years I had in Tampa.

But I think it was blown out of proportion maybe a little. But I love New England, love everything about it.”

When you consider Gronkowski is the human equivalent of a golden retriever, I can’t imagine anyone can really stay mad at him for too long, and that clarification should be more than enough to assuage anyone who felt like he slighted his former team.